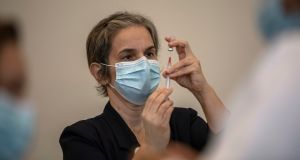 Brazil started its national vaccination campaign against coronavirus on Monday, with doubts over the country’s capacity to produce enough doses to bring the pandemic under control in the medium term.

The administration of far-right president Jair Bolsonaro was forced to bring forward the start of the campaign following regulators’ approval of two vaccines against the coronavirus on Sunday.

After the minister ceded to the pressure, vaccinations started in a series of ceremonies around the country where more than 210,000 people have already died of Covid-19.

This chaotic start is the latest misstep by an administration whose response to the pandemic has been heavily criticised, prompting renewed calls for Mr Bolsonaro’s impeachment.

The federal government has been forced to source the vaccines now being distributed from Mr Bolsonaro’s arch rival, São Paulo’s state governor João Doria, who invested heavily in the CoronaVac vaccine developed by Chinese company Sinovac. Its partner, the biomedical Butantan Institute of São Paulo state, trialled the drug in Brazil, and won approval for use from regulators on Sunday.

Fearing a political success for a probable rival in next year’s presidential election, Mr Bolsonaro has for months sought to undermine confidence in what he labelled the “Chinese vaccine”, even warning side effects could turn those taking it into alligators. However, on Sunday a tearful Mr Doria looked on as nurse Mônica Calazans became the first Brazilian to receive the vaccine, prompting the banging of pots and pans in several cities in celebration.

Mr Bolsonaro remained silent on the development, while Gen Pazuello accused Mr Doria of disloyalty to Brazil’s federal structure by rushing to ensure he oversaw the country’s first vaccination.

Last week the health minister was humiliated when in a bid to trump Mr Doria he announced he was sending an aeroplane to India to pick up two million doses of the AstraZeneca vaccine only for the government in Delhi to veto the operation.

The AstraZeneca vaccine was also approved by regulators on Sunday for general use and is the main solution in which the federal government has invested in. Yet it is expected to be months before it is available in significant quantities.

The Butantan Institute says by the end of March it will have made available 46 million doses of CoronaVac in a country with a population of 212 million.

The exposure of the administration’s failure to properly prepare for the approval of vaccines follows on revelations it was warned that the jungle city of Manaus was running short of oxygen just as hospitals were filling with a new wave of infections. It failed to take action, resulting in patients dying asphyxiated in their beds last week.

In response there have been renewed calls in congress to open impeachment proceedings against Mr Bolsonaro.