In 1938, Eileen Nangle was one of only 86 women who passed the Leaving Cert 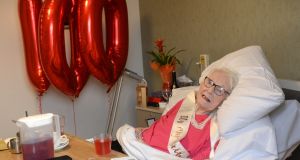 Reaching the age of 100 is an achievement in itself. Doing so having survived Covid-19 is an occasion for double celebration.

Eileen Nangle turned 100 on January 18th. She is older than the State and was, until the death of her husband three years ago, half of one of the oldest couples in Ireland.

Her room in Trinity Care AnovoCare Nursing Home in Swords on Monday resembled a florist as it was piled high with flowers. Due to Covid-19 restrictions, her family could only visit her by speaking to her through the car park window. She celebrated with a Baileys.

When she did her Leaving Certificate in 1938, she was one of only 86 women to pass the examination that year.

She trained as a nurse in Richmond Hospital. She worked in the first resident autistic unit in St Paul’s Hospital in Dublin.

She met her future husband, Edward Nangle from Drumleague, at a dance in Co Leitrim when she was 18. A few years later, upon his return from completing his nurse training in the United Kingdom , they met again in Dublin. They married in 1952.

Mrs Nangle put down her longevity to “hard work” and to physical and mental exercise. She kept her mind sharp by playing sudoku and crossword puzzles. She enjoyed pitch and putt.

Turning 100 has been a bittersweet experience for Mrs Nangle, who said she misses her husband terribly, but is proud of her three children, eight grandchildren and eight great-grandchildren.

Mrs Nangle tested positive for Covid-19 in October but recovered thanks to the work of the staff in the nursing home. She did not need hospitalisation.

A celebration with her family will occur at a different date.

Her granddaughter Gill O’Connor described her grandmother as an “ incredibly strong, brave, inspiring, beautiful and witty woman – her accomplishments as a nurse and as a person are too many to mention so we’ll stick to the main point.

“She has inspired all of us, most recently by surviving Covid-19 at 99 years old. Today, we are lucky to have her in good spirits. We know she’ll be missing our grandad on her birthday, as will we, but we know he’ll be celebrating with us somewhere.”