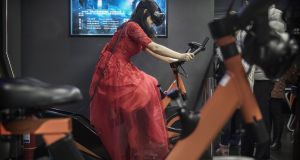 Out of this world: A woman rides a bicycle simulator at Leke Virtual Reality Park, a leading Chinese chain, in Beijing.

Number of signatures on a petition by vegans in the UK against the new £5 note which, like all plastic money, contains tallow derived from animal fat. As does soap, candles . . .

Number of polymer notes in circulation. Some 50 billion have been produced since they were first introduced in Australia in 1988, almost all of them by a company called Innovia.

Countries that use polymer bank notes, which signatures to the petition describe as “disgusting” and “unethical”.

Image of the week: Virtually special

Some people will do anything to escape marriage. This Chinese woman riding a bicycle simulator is taking a break from having her pre-wedding photos taken at Leke VR Park, a leading Chinese chain, in Beijing. Virtual reality might still be a niche technology in many western countries, but it is flourishing in China, with hundreds of VR arcades, kiosks, cafes and “experience rooms” springing up in cities across the country, offering the chance to delve into some VR for the price of a cinema ticket. The Chinese are right about this: virtual reality is brilliant. Reality, on the other hand . . .

The “mini-dollar” is what some currency markets aficionados are calling sterling – which seems a little cruel – although the tag is not meant to be pejorative; in fact, it could be sterling’s saviour in 2017. It merely refers to the phenomenon by which the pound tends to be lifted whenever the dollar has a rally. Currency strategist Adam Cole suggested this week that while the pound still has further to fall, its historical connection to the dollar may leave it less exposed than the euro to a broader dollar rally on foreign exchange markets. “In some ways the pound is a mini-dollar,” he says. Hurrah for sterling. But perhaps boo for the euro.

He’s no newbie, but the billionaire Saudi prince has garnered headlines again this week by calling on his country to lift its ban on women driving cars as a matter of economic necessity as well as women’s rights. The influential investor is not a politician but he is the chairman of Kingdom Holding Company which has stakes in Disney, Citigroup, 21st Century Fox, News Corp, Apple, Twitter and, well, General Motors.

Repealing the ban would mean families wouldn’t have to hire overseas drivers who send their wages home, he observes. But he’s also not Paleolithic. He described the prevention of women from driving as an “unjust act” on a par with depriving them from education or the right to an independent identity. There’s a chance he might be listened to – after all, he’s a man.

Scandal-ridden blood testing group Theranos once promised it could deliver a full range of laboratory tests using just a fingertip pin-prick rather than a full needle and syringe, but its claims were too good to be true. The stake of one-time paper billionaire chief executive Elizabeth Holmes was revised in June to a big fat zero, and she’s put a dent in the wealth of some big names.

1. Rupert Murdoch: He’s reported to have made a $100 million investment. Ironically, the Theranos scandal was uncovered by the Wall Street Journal, which he owns.

2. Riley Bechtel: The chairman of a construction giant Bechtel Group also chipped in a similar amount and is on the Theranos board.

3. Walgreens: The US drugstore chain pumped about $130 million into Theranos and was given a tour of its blood-testing facilities, all of which have since shut down.

4. Cox family: As if newspaper owners weren’t suffering enough, the family that controls Cox Enterprises, a US media and automotive sector conglomerate, also backed Holmes in a funding round.

5. Larry Ellison: The Oracle co-founder is very, very rich and luckily he was an early investor in this case, so he didn’t pay all that much for his shares.

1 Basic income for all: Has the Covid crisis given us a new economic model?
2 Only way is up for Stripe as valuation skyrockets
3 ‘I don’t need to do any of this. . .I don’t actually need to work.’
4 Brexit stumbling blocks persist as Barnier travels to London
5 Unilever’s Dutch and British arms merge after 90 years ahead of Brexit
6 AIB’s mortgages sale, Brexit warnings and wherefore Ulster Bank?
7 Online shoppers face unwelcome tax surprise
8 How to gift your child a house deposit . . . tax free
9 Musk’s money, Santa’s immunity and Blinken’s Brexit analogy
10 We continue to ignore massive pensions elephant in the room
Real news has value SUBSCRIBE