‘Manifestos are one thing, but programmes for government are a different animal’ 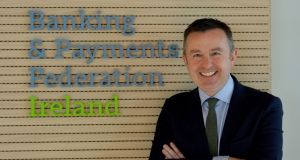 Brian Hayes, chief executive of Banking and Payments Federation Ireland: “People need to be relaxed about this.”

Senior members of the Irish business world envisage no difficulty developing a working partnership with Sinn Féin, should the left-leaning party be part of the next government.

As the dramatic result of the election took shape, global financial newswire Bloomberg suggested now “could be a good time to dump the country’s bonds” as risks may increase, citing reasons such as spending promises by Sinn Féin.

“People need to be relaxed about this,” said Mr Hayes, chief executive of Banking and Payments Federation Ireland.

In its manifesto, Sinn Féin made huge spending promises and effectively said it would narrow the tax base. However, it also pledged to retain the 12.5 per cent corporation tax rate and protect funding for investment agency, IDA Ireland.

“It was a change election. If people were talking about radical change to investment policy and free movement of capital, that would be a worry. But I don’t think they are. I’m confident of a stable government.”

Danny McCoy, director general of employers’ lobby group, Ibec, said he could “absolutely” see the Irish business world being able to work with Sinn Féin: “We have seen them in action in the North. Their instincts are not that mad when it comes to business.”

Mr McCoy called for the next government to enter a process of “social dialogue” with business and societal groups to discuss investment in infrastructure and public spending.

“The public sector is too small for the size of the private sector, and that is really something for Ibec to say. The lack of doctors, the lack of guards etc. You can feel it. We agree there needs to be an allocation of resources towards issues that affect people’s everyday lives, like housing.”

He called on Sinn Féin, if it enters government, not to “frighten the horses” when it comes to issues such as attracting foreign investment.

The American Chamber of Commerce Ireland, which represents many US-based FDI investors here, said it wants the next government to provide stability and “remain committed to Ireland’s business friendly environment”.

Prominent property developer, Johnny Ronan, called on the party to be “pragmatic” if it enters government: “Their manifesto makes clear that the party recognises the benefits and jobs that have flowed to Ireland as a result of foreign direct investment. It’s crucial that commitment is maintained.”

He said much of Sinn Féin’s investment promises were “sensible stuff. Business is part of the solution here, not part of the problem”.

Mr Ronan has previously developed premises for FDI investors such as Amazon, and is currently building a new headquarters for Facebook. He also has a pipeline of up to 1,400 residential units. One of Sinn Féin’s signature election promises was a rent freeze and a promise to invest €6 billion in housing.

“The electorate has sent a clear message about the importance of delivering affordable housing. Every unit built is part of the solution here,” he said.

Mr Ronan criticised building height restrictions in Dublin, however, and said the new government “simply has to get a proper grip on the planning process”.

“We recently had permission granted by An Bord Pleanála to deliver over 600 residential units. Dublin City Council is now seeking a judicial review of that decision, holding up residential construction in the middle of a housing crisis.”