Mediterranean island nation has turned around economy since deep recession 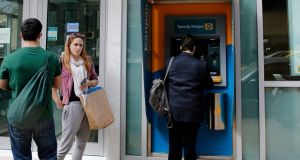 The bond sale represents the first time the country has sold debt with a 30-year maturity, and it comes three years after the country emerged from a painful bailout programme

Cyprus has seen strong demand for its inaugural 30-year bond sale in the latest sign of the country’s dramatic rebound since a fiscal and economic crisis six years ago.

The Mediterranean island nation garnered more than €5.9 billion in orders, well beyond the €750 million on offer. The country also drew €4.9 billion in orders for five-year paper. The offerings were expected to price later on Wednesday.

This represents the first time the country has sold debt with a 30-year maturity, and it comes three years after the country emerged from a painful bailout programme, in which it borrowed roughly €7.5 billion from the eurozone and International Monetary Fund.

It has found more stable footing since losing access to international capital markets in 2013 amid troubles in its banking sector and deteriorating public finances. The country’s economy has grown every year since 2015, according to official data. It contracted 5.8 per cent at the depths of its downturn in 2013.

Last year, gross domestic product increased 3.9 per cent, exceeding the 1.9 per cent pace recorded for the eurozone as a whole.

Cyprus also now maintains a BBB- rating at Standard & Poor’s and Fitch - with both rating agencies having upgraded the country to the mainstream investment grade rankings last year. Moody’s still rates Cyprus at Ba2, leaving it in the speculative-grade territory favoured by investors with a higher risk appetite.

Investors more broadly have been snapping up riskier debt in recent months as they seek out higher returns amid persistently low rates.

An abrupt halt to the Federal Reserve’s rate-rising regimen and a slowdown in the European Central Bank’s tightening plans have both helped to create a better backdrop for bond investors, Michael Krautzberger, head of European fundamental fixed income at BlackRock, said on Wednesday.

“Monetary conditions have eased quite a bit recently,” he said at a press event in London. Mr Krautzberger added that the European economy may “be around a turning point” after a sluggish conclusion to last year and weakness early in 2019.