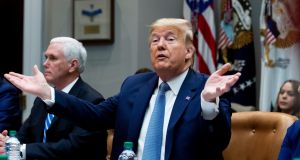 US president Donald Trump: his assertion that coronavirus is ‘totally under control’ make him look like the mayor in Jaws. Photograph: Michael Reynolds/EPA

It’s good politics to give worst-case scenarios. Most of the time they never arise and it’s better to be seen to be overly cautious than blasé. Think back to the recurring reassurances of a “soft landing” we got from officialdom ahead of the 2008 crash.

Donald Trump’s assertion that coronavirus is “totally under control” or that cases in the US will soon drop to zero make him look like the mayor in Jaws, blithely ignoring reports of a killer shark to protect the local economy during tourist season.

In contrast Taoiseach Leo Varadkar has jumped in with two feet, suggesting that as much as 60 per cent of the Republic’s population could contract the virus. This led to media reports that as many as 85,000 people here could die. It’s an extraordinary assertion in the context of a global pandemic that has killed 4,000, mainly in China, where it now appears to be under control.

The figures are plausible: 60 per cent of the Republic’s population is 1.9 million and a Covid-19 mortality rate of 3.4 per cent presupposes 85,000 deaths. The Irish Association of Funeral Directors has even advised members that funeral services should not take place for people who die from the disease, at least not immediately, and their remains should be brought straight to the crematorium or cemetery for committal, presumably to control the spread of infection.

What will these numbers and protocols look like in a few months? Hysteria or prescience?

The virus cannot be stopped, only slowed, health authorities tell us, principally through social distancing measures. Sporting and social events such as the St Patrick’s Day festival have already been axed. The next phase – the delay phase – presumably involves school closures and the reliance on remote working on a grand scale.

These measures, however, need to be timed correctly. As the UK’s chief medical adviser, Prof Chris Whitty, said, there was a risk of people becoming “fatigued” with the measures before the outbreak has peaked if shutdowns are introduced too early. It’s questionable whether western countries will be able to impose the same sort of lockdowns and mass quarantines on their populations that China has done, given the latter is a dictatorship.

And the economic hit from such an unprecedented lockdown is likely to be significant as consumption is the engine of a modern economy. The OECD is forecasting a relatively modest hit to global growth of 0.5 per cent if the virus is reasonably contained and short-lived, and about 1.5 per cent in the event that the impact is longer-lasting and far-reaching. These estimates may be modest in the context of the mass lockdowns we’ve seen in China and now Italy.

To cushion the blow, the Government has announced a €3.1 billion stimulus package, one of the biggest per-capita spends of any country, amounting to almost €630 per person, according to Goodbody stockbrokers. This compares with just €21 in the US and €124 in Italy, the worst-affected country outside Asia according to reported figures.

To put this in context, the Government’s contingency spending plan for hard Brexit amounted to €4 billion over five years.

The bulk of its coronavirus package (€2.4 billion) will go towards income supports for those who get sick, with workers in line to receive a new higher rate of sick pay of €305 per week. But it’s extremely unlikely this will be taken up.

If, for example, 50 per cent of the State’s 2.4 million workforce had to take two weeks off due to the virus, the cost to the exchequer would be in region of €754 million, barely a third of the money set aside. Is the Government being overly cautious?

It is right to pinpoint the likely fall-off in demand and spending from thousands of workers being off sick and/or from uninfected people simply staying away from restaurants, supermarkets and events as the nexus through which economic hit will come. Ireland’s export-led economy is also highly dependent on the global economy, with nearly 50 per cent of jobs here supported by foreign demand, leaving us more vulnerable than most.

The fact that so much of our exports are centred on pharma and information technology, both of which may see a rise in demand during a confining health crisis, may offset some of the blow.

That said 40 per cent of the value-add of Irish exports is imported and therefore reliant on international supply chains, which have already been disrupted, with a knock-on impact on earnings and employment.

The next big moment in terms of a policy response is likely to come on Thursday when the European Central Bank holds its monthly monetary policy meeting. With monetary stimulus all but exhausted from the crash – rates are already on the floor and the ECB is already involved in a massive bond-buying programme – it will most likely call for a more co-ordinated fiscal response from EU governments.

Financial supports such as income supports – or mortgage holidays, as Italy announced yesterday – are, in any case, a more appropriate response to a temporary shock as they feed into the economy more quickly.