House prices in Kinsale rising faster than anywhere in Ireland 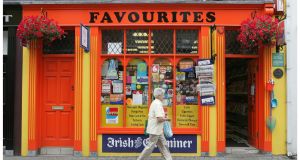 A newsagent in Kinsale, Co Cork where house prices are now rising faster than anywhere else in the State, up 40 per cent in the last 12 months. Photograph: Alan Betson/The Irish Times

House prices in Kinsale, Co Cork are now rising faster than anywhere else in the State, up 40 per cent in the last 12 months, while prices in Cahir, Co Tipperary slumped 15.8 per cent during the same period.

The uneven nature of Ireland’s property market is reflected in the latest Residential Property Price Index, compiled by the Central Statistics Office (CSO), which provides a more detailed breakdown of trends and prices paid than previously.

The new figures show Dublin 6, which contains the upmarket areas of Ranelagh and Rathgar, is still the most expensive place in the State to buy with the average price paid for a dwelling in the 12 months to July put at €694,148.

Outside of Dublin, Greystones and Bray in Co Wicklow were the two areas with the highest average prices of €404,717 and €363,907 respectively.

In terms of annual inflation, nowhere eclipsed Kinsale, where the average price paid for a house in the 12 months to July was €359,259, up 40.5 per cent on the previous 12 months.

The second highest annual property price inflation was recorded in Dunboyne, Co Meath where the average price paid in the last 12 months was €355,000, up 33.3 per cent on the previous period.

The post codes of Dungarvan, Cavan and Killarney also recorded annual inflation rates in excess of 25 per cent.

Conversely, the CSO’s index, which is based on stamp duty returns and includes data on cash buyers for the first time, shows the average price paid for a property in the Tipperary town of Cahir fell by 15.8 per cent to €104,878 in the 12 months to July.

The postal code where householders paid the lowest average price in the State was in Castlerea, Co Roscommon, where the average price was €72,350.