Republic categorises much of its social care spending as health expenditure, while other EU countries do not do this 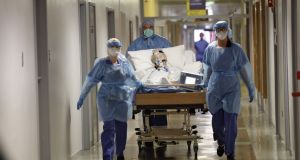 The ESRI report makes it clear that healthcare spending should not be interpreted only as expenditure on hospital services. Photograph: Alan Betson

High prices and wages have obscured the “relatively low volume” of healthcare that the Republic provides, according to the Economic and Social Research Institute (ESRI).

A new report from the economic think-tank shows that State healthcare spending in the Republic is the highest in the EU relative to national income. However, Dr Maev-Ann Wren, ESRI senior research officer and the report’s lead author, says that understanding the Republic’s high spending should take into account that “relatively high prices and wages have obscured the continuing relatively low volume of Irish healthcare services delivered”.

She noted that it was against this backdrop that the HSE and the Government prepared for the Covid-19 pandemic while fearing that the public health system might be overwhelmed.

Dr Wren noted that healthcare spending was sometimes understood as the money allocated to hospital services. This leads to a disconnect between the Republic’s apparently high spending on health and its over-stressed hospital system.

She adds that the findings in the report, which examines the many categories of expenses that the Republic includes as healthcare spending, make it clear that it should not be interpreted only as expenditure on hospital services.

Countries are often ranked according to the share of national income that they devote to healthcare spending, the ESRI said. However, the research found that various EU states categorise different things as healthcare spending, so adjusting for this affects each nation’s standing.

Consequently, the Republic ranks first in the EU for healthcare spending as a share of national income, but it drops to ninth when those figures are adjusted for relative prices.

Also, the Republic categorises much social care spending as health expenditure, while many EU countries either do not include it at all or only attribute some of it to their health services.

Using data from 2017, the ESRI found that the State included €4.6 billion in social care spending as health expenditure. This was 22 per cent of the total.

The Republic includes more than €900 million in payments to family carers in its healthcare budget, but countries such as the Netherlands do not class this as healthcare spending.

The ESRI says that if health and social care are combined Irish spending per person, adjusted for relative prices, ranks as 10th in the EU.