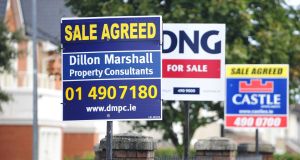 Latest figures show Irish property prices rose by 13 per cent in the year to April, against a background of tight supply. Photograph: Aidan Crawley/Bloomberg

Irish property prices are now rising at the fourth fastest rate in the world, as experts say growth will continue until supply ramps up to meet demand.

According to the Knight Frank Global House Price Index for the first quarter of the year, Irish property prices are rising at the fourth fastest pace in the world, with growth of some 12.7 per cent in the year to March 2018.

Supply constraints are a common feature of the fastest-growing countries – 96,000 apartments are due to be released in the next three to four years in Hong Kong, which might quell price growth, but the survey found that supply constraints alongside strengthening demand are together putting pressure on prices in both Malta and Jersey (12.1 per cent).

Lack of supply is also a critical feature of the Irish market, leading to continued price growth. Latest figures show that property prices rose by 13 per cent in the year to April, against a background of tight supply. Last week the Central Statistics Office offered some clarity on the level of construction being undertaken, when it revealed that only 14,446 properties were built last year – far below official figures.

Investec economist Philip O’Sullivan said housing “remains the biggest domestic issue in the economy”, with a “significant disconnect between housing output and demand”. He forecast that it would be 2021 or 2022 before supply rose to meet demand, and as such, he expected prices to continue to rise.

However, some relief could be in sight with property website MyHome.ie, which is owned by The Irish Times, reporting a “ dramatic rise” in the number of houses available for sale in Dublin. Some 5,083 houses are currently on sale in the capital, up 32 per cent on last year.

1 What is Covid Tracker Ireland?
2 Why gift a son now if it eats into his tax-free inheritance threshold?
3 High Court refuses Denis O’Brien application for discovery of documents
4 SuperValu and Centra MD Martin Kelleher stepping down
5 Will family’s tax debt stop me getting my inheritance?
6 Copper Face Jacks pays out €45.95m in dividends to owner
7 Holiday home rental company exits Irish market
8 Spar-owner BWG explores potential for online shopping ‘pot of gold’
9 Can we finally say farewell to the scourge of hot-desking?
10 Ireland’s economy set to shrink 8.5% due to pandemic
Real news has value SUBSCRIBE