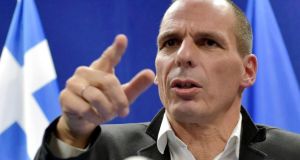 Minister for Finance Michael Noonan travels to Brussels for a meeting of euro-zone finance ministers that is expected to be dominated by Greece, as the Greek government signalled its intention over the weekend to hold a referendum should its reform proposals be rejected by international lenders.

Today’s eurogroup gathering, which will be attended by Greek finance minister Yanis Varoufakis, is the first since euro-zone finance ministers granted a four-month loan extension to Athens just over two weeks ago, on condition the government presses ahead with reforms.

Mr Dijsselbloem welcomed the proposals as “helpful” but added that they needed to be scrutinised by Greece’s international lenders.

“This document will be helpful in the process of specifying the first list of reform measures,” the euro group head wrote in his official response to Mr Varoufakis, adding that the proposals “will need to be further discussed with the institutions.”

With Athens facing about €2 billion of debt-servicing payments later this week, it needs to convince its international lenders to unlock the outstanding €7 billion due to the country under the current bailout programme. Negotiations are ongoing between Greek officials and the three creditor institutions, and no specific decision is expected from today’s meeting.

The suggestion that Greece might hold a referendum is the latest proposal by the government of Alexis Tsipras to break the deadlock between Greece and the lenders that have financed the country for the past five years. Mr Varoufakis said citizens would be asked to vote on the country’s economic policy – not EU membership – in any referendum.

“When I hear certain declarations of the Greek government, I ask myself: ‘What are they still doing in this mechanism?’” he said. He also told the Belgian daily De Tijd he believed Syriza had “made promises it cannot keep,” adding the Greek public would “understand quickly that they were deceived by false promises”.

The ECB is effectively keeping the Greek financial system afloat, providing emergency liquidity assistance of up to €69 billion to Greek banks through the Greek central bank. On Thursday, ECB president Mario Draghi ruled out raising the limit on the amount of T-bills that could be issued by Greece – a key demand of the Syriza-led government – pointing out that the EU treaty prohibited monetary financing of governments.

Mr Draghi is understood to have held a telephone call with Mr Tsipras on Saturday.