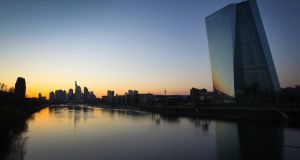 The sun sets behind the European Central Bank and the city skyline in Frankfurt, Germany. Photograph: DANIEL ROLAND/AFP via Getty Images

Europe is likely to experience a more severe recession than the rest of the world and might not show proper signs of recovery until next year, according to European Central Bank vice president Luis de Guindos.

Economic prospects are worsening as governments across the 19-nation euro area extend lockdowns to rein in the spread of the coronavirus. The French economy contracted some 6 per cent in the first quarter, Germany’s is expected to shrink nearly 10 per cent in the current period.

“In the euro area, the most likely scenario is that we will see some signs of growth starting in the third quarter, but we will have to wait until 2021 to see a genuine recovery in economic activity,” Guindos said in an interview with Spanish newspaper La Vanguardia and published on the ECB’s website. “In any case, 2021 will not be able to make up for all of the downturn in 2020.”

The ECB is injecting unprecedented amounts of monetary stimulus into the economy, paying banks to borrow to ensure credit keeps flowing to companies and households. Policy makers also committed to buying more than €1 trillion of debt.

European governments are also stepping up. After making available hundreds of billions of euros individually to support their own economies, finance ministers have agreed on a joint €540 billion package.

“With all these measures now in play, Europe is better equipped to respond to this unprecedented crisis,” Guindos said.

Investors are already concerned that countries’ increased bond issuance to fund loan and guarantee programmes as well as other measures will be the beginning of a new debt crisis.

Guindos said additional government spending to counter the impact of the virus could be as high as €1.5 trillion - “an amount the likes of which we’ve probably never seen before”.

At the same time, he stressed that debt levels in the euro area are sustainable.

“When this crisis is over, economic conditions will get back to normal,” he said. “We are not looking at any scenarios where this debt is a problem. It’s not a scenario I’m considering.” - Bloomberg