Apple dismisses tax bill, says Ireland ‘doesn’t do any engineering for us’ 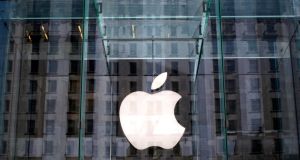 Apple: The global tech giant is ‘a convenient target because it generates lots of headlines’, the company’s general counsel claims. Photograph: Reuters/Mike Segar

Apple’s combative stand underlines its anger with the European Commission, which said on August 30th that the company’s Irish tax deal amounted to illegal state aid and ordered it to repay up to €13 billion to Ireland, where Apple has its European headquarters.

Apple intends to lodge an appeal against the commission’s ruling at Europe’s second highest court this week, general counsel Bruce Sewell and chief financial officer Luca Maestri told Reuters in an interview at the company’s global headquarters in Cupertino, California.

The iPhone and iPad maker was singled out because of its success, Mr Sewell said.

“Apple is not an outlier in any sense that matters to the law. Apple is a convenient target because it generates lots of headlines. It allows the commissioner to become Dane of the year for 2016,” he said, referring to the title accorded by Danish newspaper Berlingske last month.

Apple will tell judges that the commission was not diligent in its investigation because it disregarded tax experts brought in by Irish authorities.

“Now the Irish have put in an expert opinion from an incredibly well-respected Irish tax lawyer,” Mr Sewell said. “The commission not only didn’t attack that – didn’t argue with it, as far as we know – they probably didn’t even read it. Because there is no reference [in the commission decision] whatsoever.”

In 2014, the European Commission accused Ireland of dodging international tax rules by letting Apple shelter profits worth tens of billions of dollars from tax collectors in return for maintaining jobs. Apple and Ireland denied the accusation.

The commission’s tax demand angered the US government, which accused the EU of grabbing revenue intended for US coffers.

Apple also intends to challenge the EU enforcer’s basis for its case, arguing that the “crazy notion of nonresidency” was chosen on purpose to produce a punitive amount.

Other arguments the EU could have used are ones based on transfer pricing – the pricing strategy between a company’s units – or the “arm’s length” principle. This is adopted by companies to sell to and buy from affiliates as if they were unrelated firms.

“Both of those other two theories at least could be fleshed out, but they produced much lower numbers,” Mr Sewell said.

He said it was not possible for Apple to comply with the EU decision because it would require Ireland to violate its own past tax laws setting different rules for residents and nonresident companies.

The Irish Government is also appealing against the commission’s tax demand. It believes it must protect a tax regime that has attracted many multinational employers to the country.

Apple plans to tell the court that the commission erred when it ruled that the head office of Irish-registered units Apple Sales International (ASI) and Apple Operations Europe existed only on paper, with no justification for the billions of euros it posted in untaxed profits.

Mr Sewell said the fact that an entity was a holding company with no employees on its books did not mean it was inactive and it could be actively managed by employees of its parent company.

“So when Tim Cook, who is the CEO of our company, makes decisions that impact ASI, the commission says we don’t care because he is not an ASI employee, he is an Apple Inc employee. But to say that somehow Tim Cook can’t make decisions for ASI is a complete misstatement of corporate law, it’s a misunderstanding of how corporations operate.”

Luca Maestri said the commission over-estimated the importance of the company’s European headquarters in Cork.

Margrethe Vestager, he said, is “arguing that the base on which we should pay taxes in Ireland is essentially all the profits we generate outside the United States . . . in a place that doesn’t do any engineering, doesn’t generate any intellectual property for us.” It was, he added, an “absurd theory”.

Apple hopes president-elect Donald Trump will enact reforms to tackle tax avoidance, which has led to trillions of dollars in profits being held abroad by US companies, Mr Sewell said.

Europeans, he said, were operating under a localised tax system, while the United States had a global deferred system. “The difference between those two creates exactly the kind of loophole that the commission has now been able to exploit.”

Currently, a law lets US companies hold foreign profits overseas without paying US corporate tax on them, unless those profits are brought into the United States.

Corporations have $2.6 trillion stashed abroad under this law. Apple topped the list, with $200 billion of profits held overseas, according to March estimates by Citizens for Tax Justice, a corporate income tax watchdog group in Washington.

1 Irish people like nothing more than being bribed with their own money
2 Seán FitzPatrick’s new Greystones’ home plan runs into privacy issues
3 Election adds to headaches for AIB boss Colin Hunt
4 Exploration group claims shares traded in breach of regulatory rules
5 The Irish economy is thriving but if you’re not feeling it – here’s why
6 Fast-growing frozen food group has a strong appetite for success
7 Hogan warns Britain on US trade deal as EU set to impose tariffs
8 Barclays to cut 100 senior roles as lender seeks to rein in costs
9 Pointy sale: How a Google reject built a $160m company and sold it to Google
10 Ad agency Chemistry closes after 20 years
Real news has value SUBSCRIBE