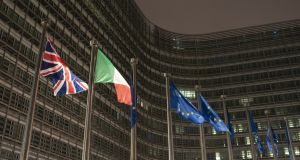 Stalling of digital tax is a victory for Irish diplomats and officials who have been building alliances against it for months. Photograph: Jasper Juinen/Bloomberg

The prospect of an EU tax on digital sales, which the Government feared could hit Irish tax revenues from internet giants based here, has receded after an alliance of Ireland, Sweden, Denmark and Germany blocked the proposal in Brussels.

The result is a major victory for Irish diplomats and officials who have been quietly building alliances against the digital tax for months, and also for Minister for Finance Paschal Donohoe who has been lobbying his fellow finance ministers on the proposal, though one senior Government source warned the French may seek to “kick the plan upstairs” to the meeting of European leaders later this month.

The commission proposals suggested a 3 per cent tax on the EU-based digital sales of multinational companies. Crucially, the tax would be payable where the user of the technology is based, rather than where the company’s headquarters is located. In practice, this would mean Ireland could lose significant tax revenues, the Government feared. The tax would have been introduced in 2022.

At a crucial meeting of EU ambassadors on Wednesday in Brussels, several countries including the Republic raised both principled and technical objections to the proposals.

The European Commission, France and the Austrian presidency had hoped that next week’s meeting of EU finance ministers would approve the measure, but this has now been stymied by the widespread objection to the plan.

It is understood that Sweden registered its objection to the proposal at a meeting of EU ambassadors on Wednesday which was preparing the agenda for the finance ministers’ meeting next week.

Sweden was joined by Denmark, Finland and Ireland, while Germany said that the proposals were not ready.

Sources said Germany indicated that it would only support an EU-only proposals for a digital tax if efforts by the OECD to address the taxation of internet giants failed.

OECD proposals are expected to be published in draft form next year, with final proposals due in 2020.

The opposition to the plans proposed by the European Commission and supported by France means that they are effectively stalled, which will come as a huge relief to opponents of the proposed tax, especially the Government, which receives huge tax revenues from US tech multinationals such as Facebook and Google resident here.

1 Fair Deal nursing homecare leaves little for bills and gifts
2 Portugal set to curb tax breaks for wealthy foreigners
3 US budget deficit forecast to blow out by mid-century
4 Pensions row fix could threaten future of State payment, actuaries warn
5 Tax and spend: What have FG done for your pocket?
6 Court asked to impose maximum disqualification on director
7 Pound dips as Bank of England decision looms
8 Will the next decade be a better one for value investors?
9 Money matters: ‘My father embarrassed us with his haggling’
10 Pilita Clark: When a rude boss keeps you waiting, why not walk out?
Real news has value SUBSCRIBE