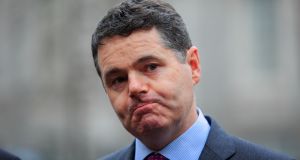 Paschal Donohoe declined to say who might succeed Prof Lane in the event of his moving to the ECB. Photograph: Collins

“I think it’s always very important that countries identify the ambitions that they have to be represented at key European institutions,” Mr Donohoe told reporters on the sidelines of the European Financial Forum conference in Dublin on Wednesday. “We are going to be putting the full weight of our diplomatic services and the Department of Finance in our efforts to get him elected.”

The Republic is the only founding member of the euro not to have held a seat on the six-member executive board of the ECB. The vice-president’s job is currently held by Vitor Constancio, who is set to retire in May.

Spanish economy minister, Luis de Guindos, is seen as the leading contender for the position as euro zone finance minister prepare to vote on the appointment on February 19th before a European Parliament hearing and a formal appointment by European Union leaders. In all, two-thirds of the ECB’s executive board is due to step down by the end of last year.

Mr Donohoe declined to say who might succeed Prof Lane should he secure one of the ECB positions that are coming up. The Government agreed on Tuesday to nominate Prof Lane for the imminent ECB vice-presidency vacancy.

“If I was to begin to speculate as to who might succeed him, we’d deal a potentially fatal blow to his campaign,” the Minister said.

However, early speculation has centred around Central Bank deputy governor Sharon Donnery and Robert Watt, secretary general at the Department of Public Expenditure and Reform, who was pipped at the post by Prof Lane for the position in 2015.

CaixaBank and Bankia strike deal to create Spain’s biggest lender 13:39
TikTok to be banned from US app stores from Sunday 12:53
China’s currency on course for best week in 10 months 12:32
Ulster Bank CEO tells staff ‘all options’ on future on the table 12:00
Applegreen’s revenues fall by a quarter but hopes for bounce back next year 11:16

1 Aldi empire wracked by family feud
2 Ulster Bank CEO tells staff ‘all options’ on future on the table
3 TikTok to be banned from US app stores from Sunday
4 Cliff Taylor: What permanently low interest rates mean for you as a saver or borrower
5 NatWest considers closing Ulster Bank in the Republic
6 Dublin-based Fenergo considers $1.5bn listing
7 Gabriel Makhlouf: ‘A full second lockdown would be very serious for the economy’
8 Mark Paul: Government faces dilemma on which businesses to save
9 How Ireland managed to green the White House
10 TikTok weighs plan for up to 5,000 workers in Dublin offices
Real news has value SUBSCRIBE