Robert Watt, Jim Breslin and Martin Fraser were due to step down after seven-year terms 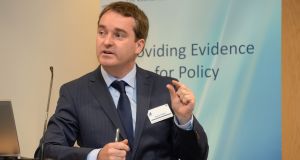 Robert Watt has had his contract as secretary general of the Department of Public Expenditure and Reform extended. Photograph: Dara Mac Dónaill

The Government is extending the contracts of three secretaries general of high-profile departments whose terms in their jobs were due to expire this year.

All three were due to step down after serving the standard seven-year term at the top of their departments, but the Government has decided to extend their contracts. Secretaries general are paid up to €192,233 a year.

The previous government appointed Mr Watt and Mr Fraser to their posts in 2011, while Mr Breslin rose to lead the Department of Children and Youth Affairs that year before switching to health in 2014.

All three would have been entitled to retire from the Civil Service in the course of this year with both a pension and lump sum, had their terms not been renewed. New rules introduced shortly after their appointments removed this entitlement.

New rules governing the terms served by senior civil servants now allow the Government to offer them equivalent roles at the same rates of pay in the public service rather than simply allowing them to retire.

Mr Watt (48) is an economist who worked with consultants Indecon and in other roles in the public sector. He sparked controversy at the National Economic Dialogue last year when he told Fr Seán Healy of Social Justice Ireland that it was unfair to say that people were not benefiting from the economic recovery.

Mr Fraser was appointed to his role in August 2011 having been assistant secretary in the same department for the previous six years.

Mr Breslin has previously worked in the Health Service Executive, the Eastern Regional Health Authority and the Department of Finance.