French oil giant Total pulls out of Iran after US sanctions 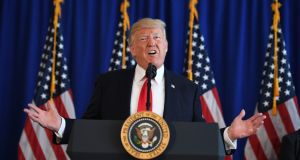 The renewed US sanctions took effect in August, after the US pulled out from the nuclear deal in May.

Iranian oil minister Bijan Zanganeh said Iran has been in the process of “looking for an alternative” to Total.

Earlier this month, Iran said China’s state-owned petroleum corporation took a majority 80 per cent share of the project. The China National Petroleum Corp (CNPC) originally had some 30 per cent of shares in the development.

The renewed US sanctions took effect in August, after America pulled out from the nuclear deal in May.

Total said at the time it could not “afford to be exposed to any secondary sanction”, including the loss of financing by American banks.

Total said in May that its actual spending to date with respect to this contract was less than €40 million.

The firm had pulled out of Iran already once before, in 2008, as Western sanctions over its nuclear programme began to ramp up.

The 2015 landmark nuclear deal – which curbed the Iranian nuclear enrichment programme in return for the lifting of international sanctions - marked a rush for Western businesses to access Iran’s largely untapped market of 80 million people.

South Pars is the world’s largest natural gas filed and is shared by Iran and Qatar, where it is called North Dome.

Qatar produces more than 590 million cubic metres per day from the shared field and plans to increase production by 10 per cent by 2022.

The country exports gas to neighbouring Turkey and Iraq, and pipelines to Pakistan and Oman are in the works.