CEO pay in Ireland on the rise, economy to grow by 5.7%, and a rural broadband option 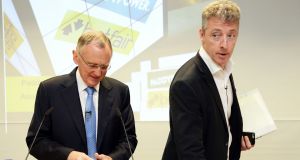 The bossesof Ireland’s top 20 companies earned, on average, 33 times more than their staff and secured pay increases twice as large as their employees, research by The Irish Times has found. And that’s despite the fact that two of the best paid executives took pay cuts in their most recent accounting period.

Strong economic growth is forecast for this year and next despite external threats such as Brexit. But there is no room for complacency, Ibec has said.The business group projects GDP growth of 5.7 per cent for 2018 and 4.3 per cent for next year. Separately, a new survey by AIB shows that despite 70 per cent of businesses in the Republic expecting Brexit to have a negative economic impact, just six per cent have a plan in place to deal with it.

FleetConnect, the firm which operates WiFi on buses and trains across the State, plans to capitalise on the Government’s faltering broadband process by offering a new mobile broadband product to rural households and businesses. The company has already signed up around 3,000 customers and believes it can extend this to 50,000 customers in a short space of time.

Turkey’s president Recep Tayyip Erdogan would have been disappointed to visit Apple’s Store at the Akasya Mall last Thursday. Despite his call for a boycott of US electronics in a spat with Washington, the store waas jammed with customers, Stephen Starr reports. However, he writes. while the uncertainty that’s surrounded Turkey’s economy in recent weeks may lift in the short term “it is not going to go away”.

How much is enough? It’s a question we need to ask ourselves and teach our children, argues Chris Johns. In an insightful column he writes: “We pay a lot of lip service to work-life balance, non-monetary goals and then go ape if our offspring show any signs of pursuing those kinds of objectives.”

Finally, in light of the publicity surrounding the dismissal of Apprentice contestant-turned-White House aide Omarosa Manigault Newman, Pilita Clark writes that sacking staff is difficult, but we should be adult about it. “There are many ways to fire people but it always helps to be upfront and honest.”