Athens on post-bailout watch, but can be ‘success story’

‘Greece is exceptional. It has received much more loans from us than any other country’ 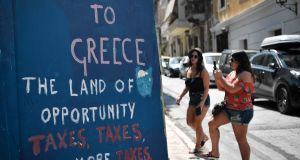 Athens is set to exit its latest bailout on Monday and rely on bond markets thereafter to refinance its debt after a near nine-year debt crisis that shrank its economy by a quarter. Photograph: Getty Images

Greece will be more tightly monitored after it exits the bailout programme than other euro zone state that received similar loans, head of the European Stability Mechanism (ESM) told a Greek newspaper on Sunday.

Athens is set to cut loose from its latest bailout on Monday. It will rely on bond markets thereafter to refinance its debt after a near nine-year crisis that shrank its economy by 25 per cent and forced it to implement painful austerity measures.

“Greece is exceptional. It has received much more loans from us than any other country,” ESM managing director Klaus Regling told Ethnos.

Portugal, Ireland, Spain and Cyprus, which borrowed from the ESM, were also monitored after the end of their assistance programmes.

“No other programme country has received anything comparable. Therefore, the monitoring will be tighter than in the other cases and this will take the form of the so-called enhanced surveillance,” he said.

Since its debt crisis erupted in early 2010, Greece has relied on the biggest bailout in economic history, more than €260 billion lent by its euro zone partners and the International Monetary Fund.

Mr Regling said the enhanced surveillance, which was agreed by the European Commission in July, aims to ensure there will be no slippage on fiscal changes and the path agreed with Greece’s lenders.

Under the tight monitoring, officials from European institutions including the ESM will visit Athens every three months for an assessment.

“As Greece’s biggest creditor by far, the ESM also wants to make sure that we will be repaid. We are a very patient creditor. But we do want to be repaid. So we will follow developments in Greece very closely,” said Mr Regling.

The ESM chief said he got “a lot of extra grey hair” in the summer of 2015 – the toughest period of the nine-year debt crisis – given the clash between the leftist-led Greek government and its euro zone partners, which led Athens to the brink of crashing out of the euro. But Greece can be a “success story” just like Portugal, Spain, Ireland and Cyprus as long as it continues to work on restoring its partners’ trust, he said.

“[The end of the bailout] is great news! The Greek people should celebrate. From my visits to Athens, I have come to really appreciate Greek wines. But tomorrow, I will celebrate it with a good glass of ouzo,” Mr Regling told the newspaper. – Reuters