Cantillon: Too little attention paid in pre-budget debate to risk of no-deal Brexit 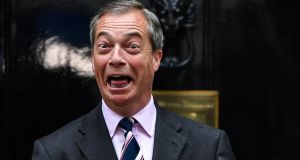 Brexit Party leader Nigel Farage. The fiscal council warned of the dangers of a disorderly no-deal Brexit, which could happen as early as October. Photograph: Jeff J Mitchell/Getty Images

The Irish Fiscal Advisory Council is correct when it points to the central conundrum facing the Government’s budget planning. Economic growth is strong, but the outlook for the economy is “unusually uncertain”. This argues for caution in framing the budget for next year – and adherence to the plans for this year – at precisely the time the electoral cycle calls for a more relaxed approach.

In the past, as the council’s thorough and well-argued report points out, budget policy has – in the jargon – been pro-cyclical. To put it more bluntly, when Irish governments have had the cash, they have spent it.

While more restraint has been exercised in recent years, partly due to European Union budget rules, there has been precious little improvement in the underlying budget position since 2015. The extra revenue flooding in from corporation tax has gone to fund higher spending. The problem in recent years has not so much been any one decision, but rather a general loosening in spending control which has stalled the improvement in the public finances.

Against this backdrop, Budget 2020 must be framed against two big threats. One is that we cannot bank on the corporate tax surge continuing, and indeed international tax reform after 2020 poses a medium-term threat in this area.

And of course there is one other, massive, risk. The council warns in no uncertain terms of the dangers of a disorderly no-deal Brexit, which could happen as early as October. This could deliver a heavy blow to growth and thus to the public finances – leaving the Government with limited firepower to support the economy through tax and spending policies without pushing up borrowing and the debt ratio.

Too little attention is being paid to this risk in the public debate on the budget options – way too little. A no-deal Brexit may yet be avoided, but the noise surrounding the Conservative leadership gives little cause for confidence. If the soon-to-be-published pre-budget statement from Minister for Finance Paschal Donohoe does nothing else, it will serve a valuable function if it sounds the warning bells on this risk.