Tax cuts of €300 million could be available in budget, Fiscal Advisory Council suggests 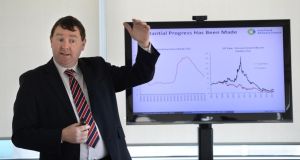 The Government’s medium-term projections for the public finances are “not credible”, the State’s fiscal watchdog has said in its latest assessment of the economy.

The Irish Fiscal Advisory Council (IFAC) said the projections – laid out in the Stability Programme Update 2019 – show exchequer surpluses increasing each year based on expenditure forecasts that were not probable.

“They imply an implausible slowdown in spending growth based on technical assumptions, which do not reflect either likely future policies or the future cost of meeting existing commitments,” IFAC said.

The council’s chairman, UCC economist Séamus Coffey, noted that while exchequer returns to date are on profile with no significant spending overrun, the State has forecast a spending increase of 8 per cent compared with last year, which he described as “very high”.

Launching its latest fiscal assessment report, the council said corporation tax was the State’s “most volatile source of tax revenue”. It added that some €3 billion to €6 billion of the €10.4 billion corporate tax receipts received in 2018 should be considered as “excess”.

“We’ve had the wind at our back for the last number of years. That can’t be expected to last forever,” Mr Coffey said, noting the on-coming Brexit debacle.

IFAC said a disorderly Brexit posed “profound risks to the public finances”, and the shock to the economy could result in the Republic’s debt ratio rising. In a disorderly Brexit, the Government may need to cut off spending or raise taxes, it added.

While the State’s economy has recovered from the “deep crisis” associated with the financial crash, the current outlook was “unusually uncertain” as a result of Brexit and the exceptional adverse shock it could cause on one side, and potential overheating on the other, IFAC said.

The council recommended that a “prudence account” be established into which corporation tax funds above forecasts be funnelled. Mr Coffey suggested that while corporation tax could be used for infrastructure but the economy doesn’t particularly need stimulus given the strong growth and low unemployment levels.

Asked whether he was dismayed at the fact the Government was ignoring IFAC’s advice, Mr Coffey said: “The Government are ignoring their own advice and projections.”

In response to IFAC’s report, a spokesman for Minister for Finance Paschal Donohoe noted that the “European Commission – the gatekeeper for fiscal rules – had assessed the Government’s budgets to be compliant with the fiscal rules.”

The spokesman added: “Having said that, it is clear that there have been within-year increases in spending beyond that set out in the budget – this has largely been due to increases in health expenditure.

“In relation to corporation tax receipts, Minister Donohoe will publish a report shortly outlining how reliance on this tax head can be reduced.”

Fianna Fáil finance spokesman Michael McGrath said the latest warnings, particularly on Brexit, should act as a wake-up call for the Government.

“The conclusions in the fiscal assessment certainly do not pull any punches and the warnings must be heeded if Ireland is going to see through the uncertain waters in the coming years,” he said.

Sinn Féin finance spokesman Pearse Doherty said: “The report is a rebuke of the Government’s claim to be prudent managers of the economy or taxpayers’ money. We continue to fund public services such as healthcare with volatile corporation taxes. The report warns that half of our corporation tax comes from 10 large multinational firms. Funding our health budgets with this revenue is reckless.”

Elsewhere, IFAC suggested that assumptions set out in the stability programme update imply that about €300 million is available for net tax cuts in Budget 2020. A 1 per cent reduction to the higher rate of income tax would result in a cost to the exchequer of about €340 million, IFAC noted.

“If, as we’ve seen for the last number of years, there were to be revenue-raising measures introduced elsewhere, that would increase the scope for fiscal measures,” Mr Coffey said.