Fiscal council warns that Brexit effect may be ‘harsher’ than expected 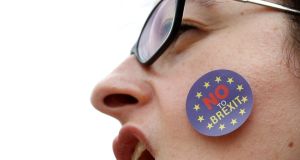 “We have to be wary of having Brexit-eyed glasses on and viewing everything through that lens.” Photograph: François Lenoir/Photograph

A potential hard Brexit could have a greater impact on the Irish economy than anticipated in current forecasts, the chairman of the Fiscal Advisory Council warned on Tuesday.

Speaking to RTÉ’s Morning Ireland, Seamus Coffey, chairman of the council – the independent body established as part of the reformed budgetary architecture – said if the UK leaves the European Union without a trade deal, there is concern about whether the impact will be accurately reflected in forecasts.

“To be fair, they are building in a hard Brexit scenario, but it could have an impact on long-term growth rate, potential growth rates and possibly revenue,” he said. “When you look at the large outcome that Brexit will have on Irish economy, it could be harsher than built into current forecasts.”

However, despite the uncertainty of Brexit, he added that “we have to be wary of having Brexit-eyed glasses on and viewing everything through that lens”.

He said certain sections of the economy that trade with the UK, such as the food industry, will be impacted the most by Brexit.

But he said those sectors are increasingly “diversified” and “dependant on world prices” rather than the sterling exchange rates.

Mr Coffey’s comments came as the council published its pre-budget statement, warning that the country’s debt levels remain very high, “which leaves Ireland vulnerable to adverse shocks such as those from a harder-than-expected Brexit impact”.

However, Mr Coffey noted that the Government’s plans to adhere to the fiscal framework “should help guide debt to safer levels, limit the damage done by boom-bust cycles and protect the State’s borrowing capacity”.

While he asserted that this framework should allow for “moderate” changes to spending and taxes, and a ramping up of public investment spending, and there is no need for “additional stimulus” at this time, the Government nonetheless needs to keep spending contained.

In its statement, the council suggested that it would be “prudent” for Budget 2018 to stick to existing tax and spending plans of about €1.7 billion. Given the impact of the public-sector pay agreement, as well as previously announced measures, this reduces the scope for new initiatives in the budget to about €500 million.

“If the Government wishes to address additional priorities, these should be funded by additional tax increases or through re-allocations of existing spending,” it said.

On the housing crisis, Mr Coffey told RTÉ that if the Government wants to provide more for social housing, then it must “transfer spending resources from elsewhere or raise additional funds from tax revenue”.