Financial services minister sees no risk from US tax reforms 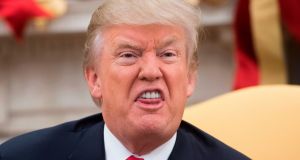 US lawmakers are working on passing rival Republican tax Bills that have passed the House of Representatives and Senate into a single piece of legislation to be signed by President Donald Trump. Photograph: AFP/Getty Images

The junior minister said that regardless of the proposed US corporate tax rate reduction from 35 per cent to 20 per cent, American multinationals would continue to choose Ireland and Europe to establish operations to manage their business interests in Europe, the Middle East and Africa.

“Our corporation tax rate is part of a suite of reasons why people come to Ireland,” the Minister told The Irish Times.

“These companies have business in Europe, they chose Europe in the main as their centre for the EMEA. That will continue.”

US lawmakers are working on turning rival Republican tax Bills that have passed the House of Representatives and Senate into a single piece of legislation to be signed by US president Donald Trump.

The proposed tax reforms, a centrepiece of Mr Trump’s agenda and the biggest overhaul in a generation, will allow US firms repatriate untaxed overseas earnings by paying a once-off tax.

Mr D’Arcy said that it would be “a good thing” if US parent companies of Irish subsidiaries can repatriate funds. It had happened in the past with little impact on Ireland, he said, and might happen again.

The Irish corporate was “very clear and very certain,” he said, and globalisation meant that companies must source products from many countries.

“I am satisfied that our strengths are still strong and our corporation tax rate, we have held it in much more difficult times than this,” he said.

Mr D’Arcy said he had written to the Central Bank about its “unhelpful attitude” to processing Brexit-related investment queries because he wanted “a proper, robust structure” introduced to allow firms raise grievances about how they have been dealt with by the regulator.

“What I am trying to do is put in place a space that industry is able to say what needs to be said and the Central Bank is able to hear what is being said and deal with it in the appropriate way,” he said.

The letter, which also criticised the Central Bank’s “unclear processes” for financial firms considering relocating or expanding, was circulated to the IDA and funds industry groups.

The Central Bank has defended its handling of queries as being in line with “sound regulatory practices”.