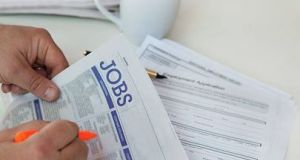 The CSO said the number of workers classified as unemployed was 138,100 in November, down from 141,500 the previous month. Photograph: Getty Images

The Republic’s unemployment rate is still falling but the official rate for November has been revised up to 6.1 per cent following the Central Statistics Office’s decision to adopt a different jobless benchmark.

In an explanatory note accompanying the latest figures for November, the agency said it had discontinued the standard Quarterly National Household Survey (QNHS), which informs the monthly numbers, in favour of a new Labour Force Survey (LFS).

The new survey, the latest version of which is still being finalised, has added several variations to the QNHS survey. The figures also incorporate the new population estimates arising from Census 2016, which recorded an unexpected flow of inward migration.

“The adjustments have resulted in changes to the absolute volumes and rates previously published but the underlying trend is largely unchanged,” the CSO said.

It put the jobless rate at a revised 6.1 per cent, down from 6.3 per cent in October.

The CSO said the number of workers classified as unemployed was 138,100 in November, down from 141,500 the previous month, which equated to an annual decrease of 29,000.

Ireland’s jobless rate is now nearly three points below the euro zone average of 8.9 per cent. On current trends it is likely to fall below 6 per cent early next year before converging on full employment, which experts believe is around 5.5 per cent.

“Unemployment fell to 6.1 per cent in November from 6.3 per cent in October, but today’s data come with a health warning ahead of revisions in January,” Davy said in a note.

“As we have been pointing out for some time, the unexpected inward migration flows captured in Census 2016 mean the labour force numbers will be significantly revised and could yet yield big changes to the unemployment rate and our understanding of the remaining slack in the Irish economy.

“Indeed, taking a broad range of indicators into account suggests that the economy is still some way from full employment.”

Mariano Mamertino, an economist with recruitment website Indeed, said, notwithstanding the change in methodology, the positive downward trend in unemployment continues.

“And progress to a rate of 6.1 per cent in November is in marked contrast to the continuing stubbornly high rates of unemployment in the southern European countries who we joined in the debt hurt locker back in 2008/9,” he said, noting in Portugal it stands at 8.5 per cent, while in Spain (16.7 per cent ), Italy (11.1 per cent ) and Greece (20.6 per cent) unemployment rates are all still in double-digit territory.