IMF and Germany disagree on economic outlook for Athens 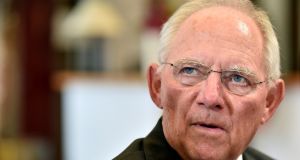 German finance minister Wolfgang Schäuble at the euro-zone finance ministers meeting in Brussels. Germany object to debt restructuring for Greece, while also insisting the IMF join the programme to lend credibility to the bailout. Photograph: Reuters

Euro-zone finance ministers gathering in Brussels on Monday failed to break an impasse on debt relief for Greece, delaying the completion of the country’s bailout review and the disbursement of about €7 billion euro in fresh loans.

The International Monetary Fund sought more debt relief for the country, pushing euro-zone creditors to ensure the sustainability of Greece’s €315 billion of obligations.

Some nations including Germany object to a debt restructuring while also insisting the Washington-based fund join the programme to lend credibility to the bailout.

Greece doesn’t have a large maturity deadline until July, when about €7 billion in obligations come due, but delaying the resolution of the programme review adds to months of uncertainty that have taken their toll on the Greek economy – which has slipped back into recession – and kept the country from returning to the bond market.

“This evening we had a first in-depth discussion on the topic of debt sustainability,” Dutch finance minister Jeroen Dijsselbloem said. “We’ve not reached an overall agreement on that part of the discussion. In the coming weeks we’ll continue our work on that and try to come to a definite conclusion at the next eurogroup in three weeks’ time.”

The IMF and Germany disagreed over Greece’s economic outlook and the amount of debt relief required to assure economic stability, according to two European Union officials with knowledge of the talks.

There was no significant progress though, the official said, asking not to be named, as the meeting was private. French finance minister Bruno Le Maire, who was attending his first meeting, said before the start “there’s a lot of work that needs to be done to bring the positions closer”.

Austria’s Hans Joerg Schelling was emphatic, urging everyone, “including the IMF, to stop the blockade, which is being upheld for political reasons rather than factual ones”.

Additional debt relief is also necessary for the European Central Bank to include Greek bonds in its asset purchases programme, which would ease the country’s access to bond markets.

Less ambitious fiscal targets would increase the amount of debt relief needed. “I hope that we will reach a solution today that ends this politically,” Mr Schäuble said on his way into the meeting.

“We’re in a position to reach a political conclusion” that would allow for a “timely disbursement” of aid.

Greece’s creditors are weighing three scenarios for easing the country’s debt burden which would lead to substantially different levels of relief. The options, outlined in a German finance ministry letter to politicians obtained by Bloomberg, make different assumptions about Greece’s growth outlook and the primary surplus – which excludes interest payments – that the country will be able to maintain in the long run.

In the first scenario Greece will grow at 1.3 per cent in the long run and its primary surplus will be on average 2.6 per cent of gross domestic product.

This will bring the country’s debt-to-GDP below 60 per cent in 2060, the document says.

The second, more pessimistic scenario sees Greek debt reaching 226 per cent of GDP in 2060, assuming growth of 1 per cent and a primary surplus of on average 1.5 per cent of GDP.

The third scenario foresees a yet-to-be-determined solution somewhere in between. The first scenario would see little or no need for debt relief, while the second one would require a generous restructuring of Greece’s debt burden.

Euro-zone finance ministers committed last May to a set of potential measures to ease the repayment terms on Greek bailout loans after the end of the programme in 2018, but the degree to which these measures will be implemented is still a subject of contention.

Greece, as well as the capping and deferral of interest payments.

The IMF has said it wants these options to be specified further, so that numbers “add up” and annual Greek debt refinancing needs are kept below clearly defined thresholds. – (Bloomberg)