EU warns of possible retaliation against any US steel, aluminium tariffs

Any move to target Europe would be deeply unfair, EU trade commissioner says 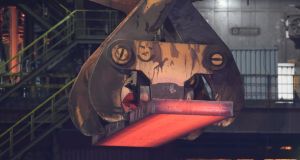 The European Union’s trade chief on Friday warned of possible retaliation if US president Donald Trump’s plans to impose hefty tariffs on imported steel and aluminium apply to Europe.

Mr Trump said on Thursday the duties, 25 per cent on steel imports and 10 per cent on aluminium, would be formally announced next week, although White House officials later said some details still needed to be ironed out.

Speaking in Singapore, EU trade commissioner Cecilia Malmstrom said any move that would target Europe would be “deeply unfair”.

“We are discussing different measures. Everything from bringing the case to the WTO (World Trade Organisation), alone or with partners who are also affected, and also safeguard measures and possible retaliation,” Ms Malmstrom said.

“These are things we are discussing internally in the (EU)Commission and with our member states. But obviously nothing will be announced until we know the full extent of these measures.”

Earlier on Friday, Australia’s trade minister also said the planned tariffs risk retaliation from other economies and could cost jobs, while China predicted harm to trade if other countries follow the example of the US Fears of an escalating trade war roiled Asian markets, hitting the share prices of steelmakers and manufacturers supplying US markets particularly hard.