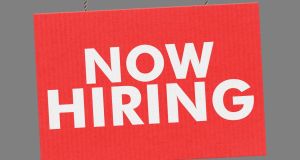 One-third of businesses with more than 50 employees claim they have recruitment problems. Photograph: iStock

Ireland’s near-full employment is beginning to have implications for businesses with about 20 per cent struggling to recruit staff, a survey shows.

The latest InterTrade Ireland business monitor, which surveys businesses both North and South, found that attracting new staff has been a persistent issue for large companies over the past three quarters.

Large businesses in particular are feeling the pinch, with 33 per cent of those with more than 50 employees claiming they had recruitment problems. The issue didn’t appear to be as prevalent among small businesses with up to 10 employees.

While recruitment poses an issue, in the context of Brexit, small and medium enterprises (SMEs) are being challenged across a number of fronts, InterTrade Ireland said.

Rising costs were cited by 36 per cent of respondents as a concern, while cash flow was an issue for 32 per cent, up almost threefold compared to the first quarter of 2018. But Brexit continued to dominate with 44 per cent worried about how it will turn out.

Cross-Border traders were particularly put out in the past quarter, with just fewer than two in five reporting growth, down from 52 per cent a year ago.

And that concern is feeding into investment decisions according to InterTrade’s survey.

Only 14 per cent of businesses plan to invest in new equipment while just 4 per cent are considering spending money on research and development. The highlight in investment terms was that 15 per cent of companies intend to increase staff training.

“SMEs need to assess if they are ready to deal with the bureaucracy surrounding customs and tariffs and to be aware of the regulations that govern their market and the impact of any changes,” said InterTrade director of strategy and policy Aidan Gough.

InterTrade’s survey is based on the views of 771 business managers across both Northern Ireland and the Republic who are interviewed quarterly.