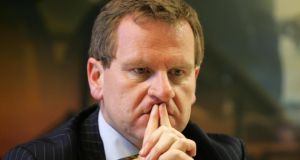 The representative group, one of the biggest lobbying for business in Europe, warned about the damaging impact of the commission’s proposed 3 per cent tax on companies with online revenues with the launch of a new report in Brussels about its views on the future of Europe.

Mr Moscovici unveiled the tax proposed by the EU’s executive arm that could collect about €5 billion a year in taxes from tech companies, including big employers in Ireland such as Google and Facebook, on the basis that digital companies pay far less tax than traditional businesses.

Launching its report hours after the Commission’s plan was unveiled, Ibec urged caution around the wider EU reform agenda pushed by French President Emmanuel Macron, warning in its report, “Ireland in the EU: A Dynamic Future,” that “now is not the time for a radical change of direction”.

Speaking to The Irish Times in Brussels, the group’s chief executive, Danny McCoy, said experience had shown that “more radical” proposals for Europe had turned out to be “very damaging.”

“We have watched all this shape-throwing before. They are always going nowhere but they can be quite damaging before they get revealed as the folly they usually are. They create a lot of noise and uncertainty,” he said.

Mr McCoy pointed to the potential for increased tensions with the US, saying that the Trump administration was “concerned this additional tax proposal is targeting US companies”. He referred to a conversation he had with US commerce secretary Wilbur Ross in Washington when they met last week on a St Patrick’s Day trip.

In line with the Government, Ibec wants the EU to embrace competitive taxation by dealing with changes through international agreements led by OECD proposals and not to pre-empt its base erosion and profit shifting (Beps) plan to close loopholes and mismatches in national tax rules exploited by multinationals.

“It makes no sense for individual member states going about this unilaterally. It’s got King Canute qualities to it, though in fairness to King Canute, he knew that he couldn’t stop the tide,” said Mr McCoy. “They know this won’t work.”

The digital tax would be more damaging to the EU than to Ireland, as it would make the UK more attractive to multinational technology companies after it leaves the EU, said the Ibec chief executive.

“The arbitrary, potential unilateralism going on here will make them think twice about Europe,” he said.

There is no official published estimate of the cost to Irish tax revenues of the EU interim tax plan, though the Revenue Commissioners are known to have undertaken some initial calculations. Were the tax to go ahead, the companies could claim amounts paid as an expense against the profits reported by their European headquarters, many of them based here. This would reduce the Irish corporate tax revenues.

Tax experts say it is impossible to come up with a precise estimate, but that the initial loss to Ireland may be in the low hundreds of millions of euro out of total corporate tax revenue of €8.2 billion, based on the Commission’s estimate that the tax would raise €5 billion across Europe.

However, there will be concern in Dublin that this is part of a reform process that would see companies pay more in the big EU markets where they have their customer base and less in the Republic in the years to come, at potentially much greater cost to the exchequer. The Government here will also be wary of the possible impact on foreign direct investment here, as the tax advantage of locating in Ireland is eroded.

Initial attention in Dublin focused on the proposal for an interim tax on the sales of digital companies. “ As many of these companies are based in and paying tax in Ireland, this proposal would reduce the corporate tax take in Ireland,” according to Joe Tynan, head of tax at PwC.” This is a unilateral measure by the EU. The challenge of taxing digital companies requires a multi-territory response,” he said, via proposals put forward by the OECD.

Peter Vale, tax partner at Grant Thornton, agreed that Irish corporate tax revenues could be threatened. The proposed interim tax “also dilutes the benefit of our 12.5 per cent tax rate as the digital tax element becomes a material tax cost for Irish based multinational groups, potentially dwarfing the tax benefits of our regime, he said.