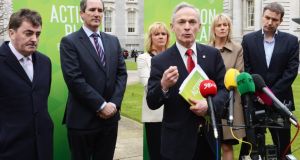 Minister for Jobs, Enterprise and Innovation Richard Bruton has praised the “patriotism” of six leading private sector figures who have been selected to help Government deliver the action plan on jobs.

Mr Bruton said the executives from companies such as Google, PayPal and Glen Dimplex would bring a “breadth of experience that simply isn’t accessible to the public service”.

The six “industry partners” he appointed yesterday will join the newly-configured National Competitiveness Council and will assist with monitoring of the seven so-called “disruptive reforms” the Government believes will boost the economy.

“To be honest there’s nothing in it for them other than contributing to the ambition of the country to reposition ourselves, to successfully make a transition from an economy which took a wrong turning,” he said.

“They are committed to do this from a sense of patriotism.”