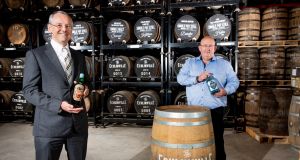 The Echlinville Distillery in Kircubbin, Co Down, is to invest more than £9 million (€9.9m) and create 36 new jobs as it expands its facilities in the Ards Peninsula.

The company is expanding its distillery to help increase production capacity and grow its brands of Irish whiskey and gin globally.

The company’s Dunville whiskey is on the shelves of almost 900 stores across Canada. Its other brands include Weavers Dry Gin and Jawbox Gin.

Shane Braniff, owner of Echlinville Distillery, said the investment would help it to substantially increase production capacity and grow export sales tenfold over the next five years.

“We are adding capacity in distillation, bottling, labelling, storage and brand development, all of which are key to further establishing our brands in major international markets including Russia and the US.”

Making the announcement, Invest Northern Ireland chief executive Kevin Holland said: “Since establishing in 2012, Echlinville Distillery has developed a number of well-established brands which are making their mark on the international whiskey and gin market.

“The investment includes the development of a new immersive visitors’ centre and the creation of 36 new jobs, which is great news for the local Ards and North Down Borough Council area.

“Roles on offer include operational, administrative and visitor centre roles, and once in place will contribute over £1 million of additional annual salaries for the Northern Ireland economy.”

1 Trump vs Biden: Stakes are high for the Irish economy
2 Will remote working become the norm?
3 AIB reports better than expected results in face of Covid, income drops 11%
4 Bake-off soy sauce tweet backfires for UK trade ministry
5 Tighter regulations for car makers will drive buyers to choose electric
6 PTSB’s €1.4bn sale is a sign it is preparing for a fresh loans crisis
7 Big night for Big Tech as Apple, Google, Amazon and Facebook post strong results
8 ‘Going abroad forced me to challenge assumptions that I had’
9 Over 60% of mortgage holders miss chance to save €10,000
10 Singer Niall Horan shares in €1.7m payday from Irish business
Real news has value SUBSCRIBE