US academic Paul Milgrom first learned off his Nobel Prize win after his neighbour and Stanford University colleague Bob Wilson pressed his doorbell at 2am to inform him the duo had won the prize for economics. Video: Reuters 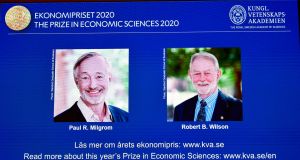 Paul Milgrom and Robert Wilson, professors at Stanford University, have won this year’s Nobel Prize in economics for their work on auction theory and the design of new auction formats.

The committee awarding the prize - officially known as the Sveriges Riksbank Prize in Economic Sciences in Memory of Alfred Nobel - said the theory they developed had been instrumental in developing new and complex auction formats now used around the world, for purposes ranging from the sale of radio spectrum to allocating airport landing slots and setting up emissions trading systems.

Auction outcomes matter - for taxpayers as well as private buyers and sellers - because they influence so many aspects of daily life, from electricity prices to mobile phone coverage and refuse collection.

Understanding how different auction formats will influence outcomes is difficult, however, because bidders behave based on the information they have but also on what they believe other bidders know.

The prize committee said the two laureates had used their insights to design new auction formats for goods and services that can be hard to sell in a traditional way, with some formats better suited to helping a seller maximise revenue, and others where the aim is to achieve a broader social benefit.

Mr Wilson, born in Nebraska in 1937, developed a theory for auctions of objects with a common value, which is uncertain beforehand, but the same for everyone. He showed why rational bidders tended to place bids below their own best estimate of the common value: because they were worried about the “winner’s curse” of paying too much and losing out, the committee said.

Mr Milgrom, born in Detroit in 1948, formulated a more general theory of auctions that allowed for calculating both common values and private values that vary from bidder to bidder - for example, where a house has a certain resale value, but suits some buyers better than others.

This showed the seller would realise a higher price if the auction was conducted in a way that allowed bidders to learn more about each others’ estimated values during the process.

One of the pair’s best-known contributions was their joint work in designing the process for the first US auction of radio frequencies to telecom operators, in the early 1990s. This was a challenge because operators did not know how much the licence for one geographical area was worth to them until licences for all areas were allocated.

Mr Milgrom and Mr Wilson invented a new format known as the Simultaneous Multiple Round Auction which involved offering licences for all geographical areas simultaneously, starting with low prices and allowing repeated bids - a format used by many other countries over the following decades.