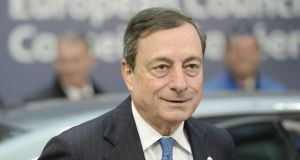 The European Central Bank is on course for more aggressive monetary easing to boost flagging growth and weak inflation, amid fresh warnings about the outlook for the global economy.

Mario Draghi, the ECB president, has won wide support for further policy action next month, according to minutes of the bank’s January policy meeting, released on Thursday.

The minutes show the governing council was unanimous in concluding that its current policy stance “needed to be reviewed and possibly reconsidered” in March, when the ECB’s quarterly projections will be available.

In another sign of concern, the OECD cut global growth forecasts from 3.3 per cent to 3 per cent. The Paris-based think tank urged governments across the developed world to act “urgently” and “collectively” to bolster activity, and warned that global growth prospects had “practically flatlined”.

On Wednesday, minutes from the US Federal Reserve’s January meeting also noted increased risks facing the American economy, amid a sharp fall in commodity prices and renewed worries over Chinese growth.

The People’s Bank of China, reluctant to cut interest rates further, said on Thursday it would inject more cash into the economy through money supply operations, that will now be conducted daily instead of biweekly.

Markets are expecting the ECB’s deposit rate to be cut another 10 basis points to minus 0.4 per cent next month, while the €60 billion quantitative easing programme launched a year ago is likely to be increased in scope. However, there remains some resistance from hawks on the governing council, notably Bundesbank president Jens Weidmann, to a radical extension of the ECB’s asset purchase scheme. Pushing interest rates deeper into negative territory could also hit the euro zone’s banking system, they fear.

The OECD’s calls for urgent action come at a time of increased doubt over whether unconventional monetary policy is effective and concern about fragility in the European banking system. “European monetary policy will soon reach its limit,” said Vincent Juvyns, global market strategist at JPMorgan Asset Management.

The ECB pushed rates below zero in June 2014. In December, it stepped up its efforts, pledging to keep quantitative easing going until March 2017 or later, while cutting its deposit rate 10 basis points further into negative territory, at minus 0.3 per cent. Mr Draghi this week heightened expectations that the bank would take further action to bolster the euro zone, when he told the European parliament the bank would “not hesitate to act”. – Copyright The Financial Times Limited 2016