Slow pace in recovering funds has landed Republic in court 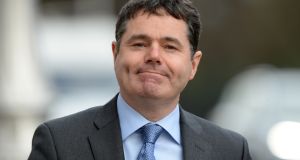 Paschal Donohoe said the detail of the Apple payment is still being worked out. Photograph: Dara Mac Dónaill

The State expects Apple to start paying up to €13 billion in back taxes into an escrow account once it is set up at the end of January, but an exact date has yet to be agreed.

More than a year after the European Union ordered that the tax be collected following its ruling that the iPhone maker received unfair tax incentives from the Republic, the slow pace in recovering the money has landed the State in court.

“When it will move in and how it will move in, we have yet to conclude with Apple but I expect that process to begin when we have completed (the setting up of the escrow account),” the Minister for Finance Paschal Donohoe told RTÉ.

Both the Government and Apple are appealing the record EU order.