Donohoe’s aversion to budget revision after Brexit a major risk 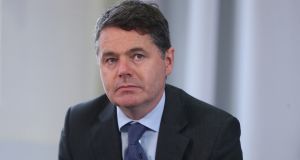 Minister for Finance Paschal Donohoe has said he does not intend to revise Budget 2020 even if the Government is proven wrong in its call on Brexit. Photograph: Niall Carson/PA Wire

Framing a budget requires, at the best of times, a degree of estimation and guesswork by a minister for finance and his minions on the economic and political outlook.

But the unveiling of next year’s taxation and spending plans, on October 8th, will require a leap of faith – coming a little over three weeks ahead of Brexit and the binary scenario of whether the UK will leave the European Union with or without a deal.

Minister for Finance Paschal Donohoe said earlier this week that the Government will have to make a judgment call ahead of budget day on the most likely Brexit scenario, even as it plans in the meantime for both.

Political sources have told The Irish Times that the inevitable conclusion from Cabinet discussions on the topic on Tuesday was that a no-deal budget will have to be delivered in early October to buttress the most exposed European economy to the fallout from Brexit – aside from the UK itself.

Donohoe has said that he does not intend to revise the budget delivered earlier in October – or issue what might be referred to as a supplementary budget – even if the Government is proven wrong in its call on Brexit.

This stance – if Donohoe sticks to it – represents a major potential threat to the economy.

The Economic and Social Research Institute (ESRI) has said in its latest quarterly economic commentary, published on Thursday, that the economy “appears to be operating at its full potential level”. In other words, it’s running at full tilt.

Under normal circumstances, Ireland, which recorded its first budget surplus in more than a decade last year as a result of windfall corporate taxes from a small group of large multinationals, should be looking to taking money out of the economy in Budget 2020 to prevent overheating, according to the ESRI. As things stand, the Government’s current spending plans are expected to deliver small budget deficits for this year and next.

Still, ESRI research professor Kieran McQuinn told journalists on Wednesday that the “worst possible outcome” would be to have a hard Brexit at a time when the Government is pursuing a contractionary budget.

But running an expansionary budget at this point in the cycle, if Brexit proves to be more orderly than anticipated, may be just as dangerous – adding fuel to the economy at the worst possible time.