Donohoe promises no ‘cliff-edges’ in removal of Covid supports

‘Our priority is to shield our citizens,’ Minister for Finance tells European Parliament 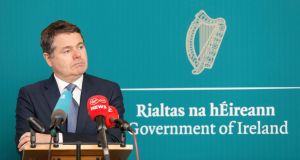 There must be no “cliff-edges” in the removal of financial supports for workers and businesses impacted by the Covid crisis, Minister for Finance Paschal Donohoe has said.

In an address to the European Parliament’s Committee on Economic and Monetary Affairs, Mr Donohoe said EU finance ministers needed to reach a common understanding on the “ appropriate fiscal stance by the summer”.

This was not about an imminent withdrawal of fiscal stimulus, he told the committee.

“We all agree that our immediate priority is to shield our citizens, in particular younger cohorts and those most exposed to the crisis. There must be no cliff-edges,” he said.

Mr Donohoe was appearing at the committee for the first time as Eurogroup president.

He said the global pandemic had triggered an unprecedented economic contraction in 2020, noting that a strong yet incomplete rebound in the third quarter of last year proved to be short-lived.

“The resurgence of infections - including the emergence of even more contagious virus mutations - and the return to the stricter containment measures are expected to weigh on economic activity in 2021,” he said.

This means governments need to continue supporting economies to preserve income and employment, in particular in the most affected sectors.

Despite the current difficulties, the economic outlook had improved, he said.

“The roll-out of vaccines gives us reason to be more optimistic, although there is still some way to go,” Mr Donohoe.

He also noted that economic prospects were boosted by the recently agreed Brexit deal, reduced geopolitical tensions and the fact that EU’s Covid-19 rescue package would reach member states in the second half of the year.

However, Mr Donohoe warned that the crisis had not only increased public indebtedness, but exacerbated other “pre-existing” macroeconomic imbalances and created new risks.

“Private indebtedness is on the rise, and banks’ balance sheets will be negatively affected. There is also a risk that income and productivity growth will remain weak for a rather long period,” he said.