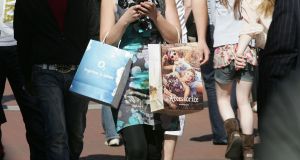 Goodbody estimated that about 36 per cent of the Irish workforce, equating to 880,000 workers, were on some form of Government supports.

The Irish economy is set for a “rapid rebound” once the Covid-19 restrictions are lifted, Goodbody Stockbrokers has predicted.

In its latest economic forecast, the firm said the economy could grow by as much as 5 per cent this year provided there is a successful vaccine rollout.

It said a €13 billion increase in household savings combined with “significant pent-up consumer demand” would fuel strong growth in the second half of 2021.

“As evidenced by the partial reopening in December, there is significant pent-up consumer demand which will be unlocked once restrictions are eased,” Goodbody chief economist Dermot O’Leary said.

However, he warned that the Government must avoid a “cliff-edge” scenario when removing vital wage supports for impacted workers and that an early announcement on the extension of the employment wage subsidy scheme would help businesses plan.

Goodbody estimated that about 36 per cent of the Irish workforce, equating to 880,000 workers, were on some form of Government supports and “given the vulnerabilities” these should only be removed carefully, with incentives for rehiring and retraining important in overall economic recovery.

While the current national lockdown will lead to another fall in domestic demand in the first quarter, it said the accelerating vaccine rollout increases the prospects of a rapid rebound in spending through the rest of the year and into 2022.

It predicted core domestic demand in the Irish economy – arguably a better measure of domestic activity than the traditional yardstick gross domestic product (GDP) – will grow by 5 per cent in 2021 and 3.5 per cent in 2022.

On housing, it estimated that 19,500 units were completed in 2020, down 8 per cent on the previous year, but warned that the rate of housing starts had fallen sharply, pointing to flatter completions trends in 2021.

Separately, Bank of Ireland’s latest Economic Pulse index, which tracks business and consumer sentiment, slumped in January as sentiment among households and firms declined in line with rising Covid rates.

Some 35 per cent of firms said they expected business activity to decline in the next three months and 52 per cent of households indicated that they were holding out on spending because they were not certain which way economic policy is going to go.

As a result the index fell 8.9 points in January and was down nearly 25 points on this time last year.