Davos closes with US signalling hope on China trade talks 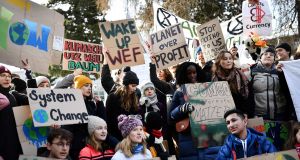 Swedish climate activist Greta Thunberg (C) marches during a “Friday for future” youth demonstration in a street of Davos on the sideline of the World Economic Forum (WEF) annual meeting. Photograph: Fabrice Coffrini/AFP via Getty Images 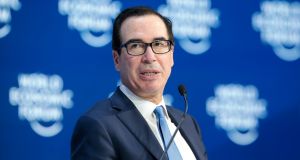 US treasury secretary Steven Mnuchin speaks during a panel session on the closing day of the World Economic Forum in Davos. Photograph: Jason Alden/Bloomberg

US treasury secretary Steven Mnuchin said on Friday that he expects to begin negotiations with China on a so-called phase two trade deal soon, with Washington and Beijing on the same page.

“My guess is they [China] will consider waiving other tariffs as part of their purchasing programme,” Mr Mnuchin said of the $200 billion (€181 billion) in additional US goods and services that China has pledged to buy.

“I don’t see any difference in our views. My expectation is that we’ll start conversations on phase two in the near future,” he said in an interview at the end of the annual meeting of the World Economic Forum (WEF) in the Swiss ski resort of Davos.

China had a low-key presence at the Davos meeting, with most of the focus on trade concentrated on a dispute between the United States and the European Union over a “digital tax”, with Washington threatening retaliation if the bloc’s members tax US-based companies before an apparent compromise was reached.

“Once there is a consensus, those tax changes need to be implemented and in many places, require legislation. We object to a tax that targets just American companies,” Mr Mnuchin said.

With chief executives representing many of the biggest companies from around the world at Davos, it is often used as a barometer of business confidence and the economic outlook.

“It seems like Europe and Asia have bottomed and the US still looks in very good shape. So there’s a lot of positive attitudes,” Mr Mnuchin said, with US tax cuts in prospect.

The biggest battleground during the four-day event has been the debate over how politicians and business leaders should tackle climate change, with much of the focus on exchanges between US President Donald Trump and activist Greta Thunberg.

Speaking on the final day of the WEF, the 17-year-old climate campaigner said leaders were not reacting to the crisis, and were not being held accountable for their inaction.

“Before we came here we had a few demands for this WEF and of course those demands have been completely ignored, but we expected nothing less,” Ms Thunberg said, speaking before marching through Davos with fellow climate activists.

Mr Mnuchin said the environment was important. “I just think it should be put in context. This goes back to a little bit of communication. The youth have focused on this one issue. But there are many other important issues that will impact the next generation.”