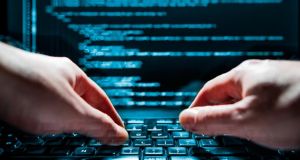 The number of cyber attacks against Irish businesses has almost doubled since 2012, according to a new report which also shows a big jump in the average cost of crimes against companies.

The PwC 216 Irish Economic Crime survey reveals more than 34 per cent of Irish organisations experienced economic crime in the last two years, up from 26 per cent two years earlier. The most prevalent crimes reported were asset misappropriation, cybercrime, accounting fraud and money laundering.

Moreover, the frequency of cyber attacks against Irish businesses has risen from 25 per cent in 2012 to 44 per cent currently, a rate that is considerably higher than the global average of 32 per cent. Of those affected by cybercrime in Ireland, nearly one in five incurred losses of between €92,000 and €4.6 million, the survey reveals.

Less than half of respondents said that they had fully trained staff respond if a technology breach were to occur. Just 39 per cent of Irish companies said they had a fully operational incident response plan in place to deal with security breaches, while 28 per cent had no plan at all.

More than a third of those surveyed in Ireland said they expected a rise in cyber attacks in the coming years. Despite this, the report suggest that many companies are not paying enough attention to the issue with less than half of board members requesting information on their organisation’s “cyber-readiness”.

Most companies currently are relying on internal audits to uncover fraud, despite the fact that this is one of the least effective ways of detecting it. The most common detection method used is suspicious transaction reporting with just 3 per cent of firms using data analytics.

The study also shows many Irish firms do not fully appreciate the non-financial repercussions of economic crime in areas such as employee morale, business relations, reputational damage and brand strength.

“The research highlights the need for vigilance on the part of companies and individuals in their commercial dealings. With cybercrime becoming so common, it is even more essential that they continue to access crime prevention advice to avoid becoming the victims of fraud,” said Garda Commissioner Nóirín O’Sullivan.