Issue due to be addressed at Dublin conference on Thursday 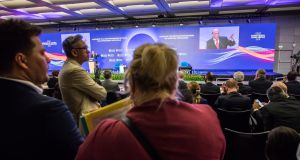 Paris gathering: The US underlined its opposition to unilateral action on a digital sales tax. Photograph: EPA

The momentum for global reform of corporate taxes was underlined at an OECD ministers’ meeting in Paris on Wednesday. US support, vital if the issue is to progress, was evident at the meeting, with the US calling for multilateral support for reform and the avoidance of countries taking unilateral action.

The push for an agreement – in the second phase of the so-called BEPS (base erosion and profit shifting) process – carries threats to the Irish corporate tax base, as it is likely to involve big multinationals paying some tax in markets where they have significant sales. The Minister for Finance, Paschal Donohoe, who attended the meeting, is due to address the issue at a tax conference in Dublin on Thursday.

More tax paid in big markets on the basis of sales will mean less tax paid here, where many big firms have their international headquarters, according to Feargal O’Rourke, managing partner of PwC in Ireland. However he said he was confident about the outlook for corporate tax revenues for the next couple of years.

The Republic has committed to the OECD process and opposed the introduction of a European digital sales tax on the major tech multinationals as proposed by France and the European Commission. A number of EU countries have gone ahead and introduced a version of this tax in their own jurisdiction, risking reaction from the US, which underlined its opposition to such unilateral action – generally affecting American companies – at the Paris meeting.