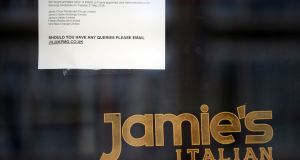 It’s Oliver now: A sign on the window of a London outlet informs passersby that Jamie’s Italian has gone into administration. Photograph: Hannah McKay/Reuters

Image of the week: Jamie’s administration

Casual dining chains have had a noticeably prolific hold over the restaurant sector in the UK over the past decade, but their fortunes have been waning of late thanks to an indigestible blend of stuttering consumer confidence, high rents and Deliveroo. Celebrity chef Jamie Oliver’s group has now crystallised the decline after years of struggle by falling into administration, with the loss of about 1,000 jobs. The Jamie’s Italian franchise based in Dundrum in Dublin operates separately and is not affected – indeed the man behind it has plans to expand – but across the pond this is a bruising business for staff, high streets and Oliver himself, who has lost millions as a result. Eleven years after the first Jamie’s Italian, the bubble appears to have burst not only for the man once known as the Naked Chef, but for the very concept of launching a chain of mid-market eateries on the back of a television profile.

26 Number of weeks of paternity leave at a full rate of pay that will be offered to employees of drinks giant Diageo in Ireland, Britain and several other countries thanks to one of the most progressive leave policies in the world.

7 Number of weeks’ paternity leave that new fathers will eventually become entitled to take under a Government plan, up from the current two. However, just as with maternity leave, employers are not obliged to pay a cent.

€245 The currently standard weekly rate paid under the State’s maternity and paternity benefits. Only 40 per cent of new fathers are estimated to avail of the two weeks’ entitlement, most likely because they can’t afford to do so.

Getting to know: Robert F Smith

“On behalf of the eight generations of my family who have been in this country, we’re going to put a little fuel in your bus,” he told the new graduates. His announcement that he would create a grant to eliminate their student loans – tens of thousands of dollars for many of the 396 students – was met with a standing ovation and chants of “MVP”, or “most valuable player”. Smith said he was sure the class would make sure to “pay this forward”, while the college president called the gesture a “liberation gift”. The one-time chemical engineer worked for Goodyear, Kraft and Goldman Sachs before starting tech investment company Vista Equity in 2000. According to Forbes, he’s worth about $5 billion. Message to next year’s speech-giver: get your chequebook ready.

Some people say the worst thing about our insidious and burgeoning surveillance culture are those signs that say “Smile! You’re on camera”, which are truly enough to make anyone want to smash things with poles. Others are expressing more serious and possibly even more legitimate concerns about the whole business.

1. Civil liberties groups
Obviously, they’re not keen, given the capacity for the technology to be used to stifle said civil liberties and reinforce discrimination against certain groups.

2. San Francisco
San Francisco became the first US city last week to ban the use of facial recognition technology by the police and other agencies last week.

3. Industry executives
Microsoft president Brad Smith last year put his hand up and suggested maybe the whole business – which Microsoft is in – should be, like, regulated or something. “We must ensure that the year 2024 doesn’t look like a page from the novel 1984.”

4. Amazon investors
The tech giant didn’t want it to happen but, on Wednesday, its shareholders voted on two motions, one calling for it to press pause on sales of its facial recognition system, another asking for an independent report into the threat to human, civil and privacy rights.

5. Wrongly arrested people
Bearing in mind that the current technology is not exactly infallible, the capacity for misidentification is prompting a queue of lawsuits.