Transactions in the first quarter amounted to €17.2 bn, up 9% 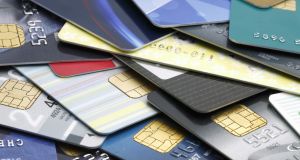 Spending in the retail sector grew particularly rapidly in March, rising 18 per cent, or by €259 million, compared to the same month in 2017.

Irish consumers showed their continuing preference for credit and debit card usage with transactions up 9 per cent in the first quarter compared to the same period last year, now standing at €17.2 billion.

And the trend of using personal funds rather than debt continued, with the value of debit card transactions 5.3 times higher than that of credit cards.

Spending in the retail sector grew particularly rapidly in March, rising 18 per cent, or by €259 million, compared to the same month in 2017. Retail spending accounted for almost half of new debit card spending. The majority of retail spending was on groceries and perishables, totalling €714 million in the month.

In services, debit cards were used to spend €203 million on transport and €95 million on accommodation while in the restaurant sector some €193 million was spend.

Credit card spending also grew, although to a lesser extent. Spending using debt increased 10 per cent in the retail sector and 11 per cent in both the services and social sectors.

Data from the Central Bank of Ireland shows that Irish tourists are increasingly using their cards abroad. Including ATM transactions, card expenditure outside the Republic averaged €532 million over the quarter, up 7 per cent on the same period the previous year.

The Central Bank’s data is collected to understand the role of cards in the domestic financial system. Only euro-denominated cards issued to Irish residents are included in the data.