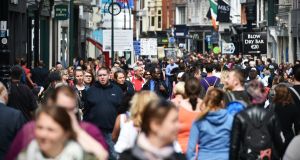 The decline in consumer sentiment stands in stark contrast to modest monthly improvements in similar confidence indicators in continental Europe, the US, and even the UK

Irish consumer sentiment slipped to a six-year low last month as households continue to batten down the hatches amid concerns around a no-deal Brexit.

KBC’s consumer sentiment index dropped to 75.3 in September, down from 77.2 in August and from a high of 96.4 for the same month a year earlier.

The decline in consumer sentiment stands in stark contrast to modest monthly improvements in similar confidence indicators in continental Europe, the US, and even the UK.

“In terms of the factors influencing confidence among Irish consumers at present, it seems that Brexit concerns are not the main issue, they are the only issue,” said KBC economist Austin Hughes.

“Unlike their counterparts in other countries, where the mood of consumers is being buffeted by uncertainty, Irish consumers appear now to be almost exclusively on downside risks,” he added.

Four of the five main components of the index were lower in September than in August. The only element to improve was consumers’ assessment of the buying climate which rose marginally.

“Whether Irish consumer sentiment has now reached peak Brexit gloom depends how still volatile political conditions in the UK develop and how related decisions translate into economic outcomes in the months ahead,” said Mr Hughes.

He added that consumers will be looking at signs that the economy and public finances won’t be hit in the way they were during the recession.

The latest index also reveals that three in four Irish consumers are expecting to see measures in Budget 2020 that will help them make ends meet better in the year ahead.

“While most conventional indicators paint a picture of a solidly improving Irish economy, the sentiment survey suggests that many consumers are still reporting significant financial pressures,” said Mr Hughes.

State subsidises public sector retirees to cover gap until State pension 12:36
Countries that fail to attract immigrants will lose out – Microsoft chief 12:07
Long-hyped smart fridges will never run out of milk or data 12:02
Trump holds America up as ‘example for the world’ at Davos 11:57
My father in a nursing home wants to gift me his house 11:23