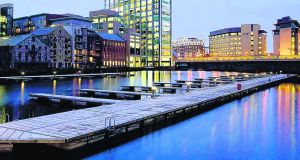 A large proportion of the world’s stock of foreign direct investment is “phantom” capital, designed to minimise companies’ tax liabilities rather than financing productive activity, according to research.

Nearly 40 per cent of worldwide FDI  – worth a total of $15tn – “passes through empty corporate shells” with “no real business activities”, the study by the IMF and the University of Copenhagen found.

Instead they are a vehicle for financial engineering, “often to minimise multinationals’ global tax bill”, said researchers Jannick Damgaard, Thomas Elkjaer, and Niels Johannesen, who carried out the study.

The findings come at a time when governments are trying to clamp down on multinational corporate tax avoidance.

Tax reform features high among the priorities of the G7 group of countries. Recent unilateral moves by France to tax global tech groups operating in the country have increased the pressure on other G7 members to reach an agreement.

The OECD has been charged with identifying globally acceptable solutions by next year.

Nearly half of the phantom FDI the researchers identified was in Luxembourg and the Netherlands. Other countries in which less than half of FDI is “genuine” included Malta, Ireland, Switzerland and a number of British overseas territories and crown dependencies, according to the study’s authors.

Brad Setser, an international economist at the Council on Foreign Relations in New York, said the study showed that “these structures - phantom companies or phantom investments - are optimised for minimising firms’ global tax”.

“Apple does not produce its iPhones in Ireland, nor does Apple design them or develop the majority of its operating system in Ireland [BUT]one of the most valuable US foreign direct investments now is Apple’s ownership stake in Apple Ireland,” Mr Setser said.

Despite recent international efforts to prevent companies from shifting profits internationally for tax purposes, the study showed that phantom capital was growing as a share of overall FDI. As late as 2010, phantom FDI made up 31 per cent of the total FDI stock; by 2017 it had reached 38 per cent.

Behind the global number, countries differ widely. The UK’s share of phantom inward FDI jumped from just 3 per cent in 2009 to 18 per cent in 2017, the estimates show. In Belgium and Sweden, the share fell from about 30 per cent to single digits in the same period.

Alex Cobham, head of the Tax Justice Network, a campaigning organisation, said efforts to reduce “profit-shifting” to low-tax jurisdictions earlier in the decade because of “fiscal and political pressures after the crisis” had, perversely, led to even “more aggressive avoidance behaviour”.

“Profit shifting has gone from a marginal feature of the global economy to a systemic feature,” he said. “This is just the way of doing business now.”

But the current reform effort is promising, he added. It will “allocate some share of profit according to where real activity takes place, and that has to be the answer, the systemic response this systemic problem requires”. – Copyright The Financial Times Limited 2019