Collapse of digital tax talks is ‘not good’ for Ireland 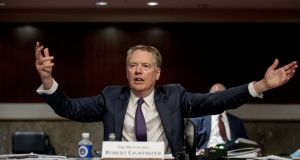 Robert Lighthizer, US trade representative at Wednesday’s Senate Finance Committee hearing in the US. Photographer: Bloomberg

The suspension of talks between Europe and the US on new international tax rules for tech giants such as Apple, Facebook and Google could be deeply problematic for Ireland as it potentially opens the door to a “free-for-all on taxation”, according to an expert.

Speaking after news emerged that the US had scrapped plans for talks with European countries and warned them of retaliatory measures if they proceed with their own taxes, Feargal O’Rourke, managing partner at PwC in Ireland, warned it could have huge implications locally.

“This is not good for Ireland. It potentially opens the door to a free-for-all on taxation. Ireland would prefer a principle-based approach at global level [through the OECD]. The European Commission might now be emboldened to take the reins on this.

“The next few months could be fraught. It could be a long hot summer of taxation,” he said.

His comments come as French finance minister Bruno Le Maire described the US decision to end talks as a “provocation” and warned the EU may impose taxes even if no deal is reached by year-end.

Nearly 140 countries are involved in the talks organised by the OECD on the first major rewrite of global tax rules in a generation to bring them up to date for the digital era.

US treasury secretary Steven Mnuchin this week warned four European ministers that discussions on a new tax framework had reached an “impasse” with the US unable to agree, even on an interim basis, changes to global taxation law that would affect tech giants such as Apple, Google and Facebook.

The Republic has traditionally supported an OECD-led approach inclusive of the US, with experts warning that the imposition of an EU-wide digital tax US technology giants has the potential to reduce Ireland’s corporate tax take.

A spokeswoman for Minister for Finance Paschal Donohoe said it was too early to speculate as to what impact the recent development may have on the progress of global tax efforts at the OECD.

“Ireland remains convinced that globally agreed action is preferable to unilateral measures when it comes to international tax affairs,” she said.

Ibec chief economist Gerard Brady said, given the growth in tax and trade proposals over recent months, a pause in the process was not unexpected but must not be allowed to become permanent.

“We continue to believe that the OECD is the only forum which can deliver a durable multilateral solution on the question of international taxation.

“The global economy is currently undergoing its most difficult period in living memory: it is imperative that both the EU and US work together responsibly over the coming months to avoid any further counterproductive escalation through tax or trade measures,” he said.

The American Chamber of Commerce, which represents more than 700 US companies in Ireland, called on all parties to renew efforts to reach agreement within an ambitious timeframe.

It said it would continue to argue for an international consensus on taxation, which it added is “best achieved through a unified approach at OECD level”.

“We believe that any recommendations in this area should be evidence based, targeted to specific remaining base erosion and profit shifting (BEPS) concerns, and remain grounded in the agreed concepts of substance and value creation in terms of the allocation of taxing rights between jurisdictions,” said chief executive Mark Redmond.

Christian Aid however said the suspension of talks was further evidence of cracks in what it described as a “fundamentally flawed process.”

“For countries like Ireland who have hitherto depended on the OECD to best represent their interests, unilateral action to tax tech companies will be seen by some as very threatening. But the challenge for the new Irish government, will be to come together and guide these unilateral solutions towards a genuinely representative and democratic mdoel, rather than some free for all,” said head of advocacy and policy, Sorley McCaughey.

Mr O’Rourke warned that, in addition to the possibility of the EU taking the lead on new rules, more countries might individually opt to impose unilateral taxes on tech companies.

The UK recently followed France and Italy in introducing a digital services tax on tech companies with a 2 per cent levy on search engines and social media platforms. It is due to kick in for US entities next year.

He stressed the suspension of talks may be linked to a move by US president Donald Trump to up the rhetoric ahead of presidential elections later this year. Mr O’Rourke suggested the OECD head of tax policy Pascal Saint-Amans will likely continue to push on with Pillar 2 proposals to reach consensus on a global minimum tax rate with a hope of looking at them afresh after those elections have taken place.

Kevin McLoughlin, partner and head of tax at EY Ireland, said the Covid-19 crisis was contributing to difficulties in reaching agreement and that this increased the possibility of further unilateral action by individual countries on tax as they seek to bounce back.

“Economic uncertainty is possibly the biggest challenge for countries and business in general at the moment, and an increase in what might be seen as unexpected unilateral tax measures – lacking a sense of global consistency – will add to that unpredictability,” he said.

This could potentially delay longer-term investment decisions which generate employment, and stimulate economic activity – both fundamental drivers for recovery from this crisis,” Mr McLoughlin said.