Analysis: The State is one of the chief opponents to pan-European digital taxation 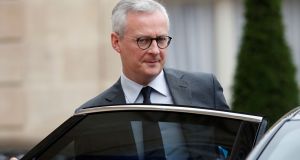 French finance minister Bruno Le Maire: “No one can accept that the digital giants can make profits from their 450 million European clients and not pay taxes where they are.” Photograph: AFP via Getty

A decision by Washington to withdraw from international talks on taxing digital companies will raise concerns in Dublin of renewed attempts to tackle the issue in the European Union.

The Republic is one of the chief opponents to attempts to agree a pan-European way of taxing the economic activity of digital companies, fearing a threat to its tech sector and competitiveness for multinational companies.

The international talks on the issue, which were led by the Organisation for Economic Cooperation and Development (OECD) and involved almost 140 countries, gave Ireland breathing space.

Dublin could argue that any EU attempts to implement digital taxes should be put on hold pending the result of the OECD talks, because global consensus was vital for any taxation to be effective. Taxation by the EU alone would allow tech firms to simply move their operations away to avoid it, for example to the US.

Washington’s withdrawal from the international talks removes the force of this argument, indicating there will be no OECD alternative to which the State can appeal.

Within hours of the news breaking, officials in the EU began indicating there would now be a renewed push to agree taxation in Europe.

“We need a digital tax up to the reality of the new century. We need an internationally negotiated agreement. If the US stop makes this impossible, the European Commission will put a new European proposal on the table,” economy commissioner Paolo Gentiloni said.

“If needed, we will react as one.”

Some EU countries, particularly France, are impatient to impose digital taxes. Paris had agreed to suspend its imposition of a levy while the talks were ongoing. Following the US withdrawal, French finance minister Bruno Le Maire announced a 3 per cent levy on digital service would be imposed this year.

“No one can accept that the digital giants can make profits from their 450 million European clients and not pay taxes where they are,” Le Maire said.

Tech companies prefer not to be taxed, but if taxation is inevitable, they support international flat rates and common rules, which are easier to comply with than legislation that differs from state to state.

A digital tax levied by the European Commission is one option discussed as a way to repay extraordinary spending planned as an emergency recovery response to the severe economic shock caused by the pandemic.

European leaders meet on Friday to discuss the recovery plan and European budget, and Washington’s move puts digital taxation firmly on the agenda.

“I imagine that some leaders will mention this point tomorrow,” a senior EU official said. “I don’t know how far they will go in that direction, but they will discuss the consequences of this decision.”