Chris Johns: Brace yourself for the Brexit ‘fudge’ crisis 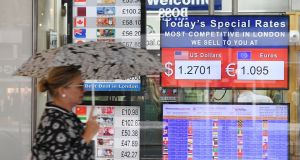 Sterling’s decline has recently resumed, albeit gently. Perhaps the only surprising thing about that statement is its last word. Seasoned market watchers are surprised that the pound is not a lot lower, such is the utter chaos surrounding the UK’s preparations for its imminent departure from the EU.

While a currency crisis on the scale being witnessed in Turkey is unlikely, the prospect of the hardest Brexit – a 60 per cent chance, according to the trade secretary, Liam Fox – should be sending the UK currency a lot lower.

Turkey’s currency woes look a lot like the events that started the great Asian financial crisis of 1997. That started with the Thai baht: it’s a period of financial history that even has its own nickname: the Tom Yum Goong crisis.

The whimsy behind that label arose mostly from the fact that it all felt very serious for a while but didn’t actually last very long. It prompted some fundamental reforms in emerging markets, which strengthened their financial architecture; policy reforms that led to increased economic resilience.

About the only thing that can be expressed with any certainty is that it is now a lot cheaper to go on holiday in Turkey: it’s a fabulous country to visit and I hope that tourism, at least, is the silver lining to Turkey’s current financial woes.

Donald Trump’s recent stirring of the pot with increased tariffs on Turkish exports is a reminder that no two crises are ever the same. The malign involvement of the US president is a new, if not unique, feature of the current situation and serves as a warning. Trump’s views and actions on international trade pose a threat to just about any trading nation, big or small.

During the Asian crisis, there was a fear of “domino effects”: analysts suggested that if Brazil devalued, there would be an intensification of the turbulence that risked spiralling out of control.

When the Brazilian currency did go down, it in fact marked the beginning of the end of market dislocation.

To this day the causes of the crisis are disputed: nobody saw it coming, its ending was wholly unexpected and many analysts have different views about what were the underlying drivers of both that start and finish. Which all goes to show that we need to be very careful when making predictions about exchange rates (or anything at all).

But history repeatedly teaches that crises can come out of the blue. It’s why many commentators urge our own Minister for Finance to think about building resilience into the fiscal situation in anticipation of a negative economic surprise. That’s good advice, of course, applicable at any time in the economic cycle but particularly apposite when things are going well.

The threats to the current global economic expansion are all too obvious: they are mostly focused on the actions of Donald Trump. His massive tax cut for rich Americans and companies already flush with profits will have long-lasting effects, not many of which are likely to be good. The effects of his continuing escalation of his trade war will almost certainly sooner or later lap up at our shores.

We have our own experience of currency crisis, albeit one that is now fast fading from memories. Of course, one of the few joys of the euro is that a small member such as Ireland will never have the economic clout sufficient to provoke a currency crisis on its own. We don’t have our own currency, so a home-grown exchange rate crisis is highly improbable. But, as we know, crisis can come in many forms, not just via the exchange rate.

So why isn’t sterling having its own major Brexit-induced crisis? The most plausible explanation is to be found in the fact that the UK economy is still growing, albeit only relatively slowly. The only adults in the policy room are Bank of England officials, who are doing a good job in very difficult circumstances.

Most importantly, most market participants don’t believe Liam Fox. There is a widely held view that while there is no positive outcome possible, the fears of catastrophe are wildly overblown. The most commonly held view in the City of London is that fudge is still very much on the menu.

Insiders reckon a deal between Theresa May and Brussels is still just about achievable, albeit one that has fudge as starter, main course and dessert on the menu. I think that’s what the markets are betting on.

But that is somewhat myopic: fudge may well be the meal of choice but what happens when dinner is over?

No matter what type of deal is done – and there are many plausible possibilities – it is next to impossible to see how Ms May can sell it to the House of Commons. Every possible deal upsets one important constituency or another: that’s the nature of every deal being a bad one.

If a deal is done, sterling is likely to go up. And then it will probably fall when parliamentary chaos ensues. Up and down: a weasel forecast, but one that says we should expect a lot of volatility. The “fudge crisis” perhaps.