China pledges to fight ‘unilateral’ US trade tariffs ‘at any cost’ 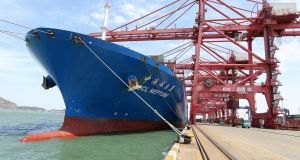 Trade tensions: A container ship is seen docked at a port in Lianyungang, Jiangsu province, in China. Photograph: Reuters

In the tit-for-tat trade conflict between China and the US, Beijing has promised to fight “at any cost” using “comprehensive countermeasures” if Washington continues what it describes as “unilateral, protectionist practices.

The Chinese authorities are ratcheting up the rhetoric after Donald Trump asked the US trade representative to consider $100 billion (€82 billion) in additional tariffs on products imported from China, the latest salvo in a worsening trade conflict between the world’s two biggest economies.

“On Sino-US trade, China has made its position very clear. We don’t want a trade war, but we are not afraid of such a war,” a commerce ministry spokesperson said.

It’s been a hectic week of tit-for-tat tariffs, which have caused major jitters on the world stock markets and unsettled exporters in both the US and China, and placed European companies on alert for possible repercussions.

China responded with the threat of tariffs on US imports including soybeans, planes, cars, whiskey and chemicals.

One Chinese entrepreneur who exports heavily overseas said he was sure a trade war would harm both countries.

“China and the US are the world’s two biggest economies. This will affect the quantity of goods that China exports and reduce the power of capacity competition,” said the exporter who requested anonymity.

“Sure, the Chinese government will fight back against the US. And in this way, I think it will push China’s industry to change the direction towards high technical items, and not just produce basic daily goods and commodities for the world,” he said.

State media weighed in behind the Beijing government, with a clarion call coming from the nationalist Global Times.

“This latest intimidation reflects the deep arrogance of some American elites in their attitude towards China,” it said in an editorial.

The Communist Party’s mouthpiece People’s Daily described the US actions as being like “climbing a tree to catch fish” and said using a trade war to reduce a trade deficit was merely compounding the situation.

“History and reality have repeatedly proved that economic globalisation has provided a strong impetus for the development of international trade and economics,” the newspaper said.

Xu Gao, an economist from Everbright Securities Asset Management, said there was no way to resolve the deep conflicts between China and the US.

“First of all, the core conflict is the historical contradiction between the first place and the second. America won’t easily cede this first position to the others. Secondly, there is big difference regarding the development path between China and US. The two countries each have their own path,” said Xu.

“Under the lead of the Communist Party, China can not be westernised. And the US wants China to take the American model, this is what China cannot do. In this situation, the conflict between China and US might be intensified,” said Xu.

China’s foreign minister Wang Yi said the recent move by the United States had violated the rules of the World Trade Organisation (WTO), which posed a threat to the foundation of the global trade system and would certainly impact the normal development of the world trade and economy.

He was speaking after a press conference with Russian foreign minister Sergei Lavrov during his visit in Russia as the special envoy of Xi Jinping.

“As a sovereign nation with legitimate right of self-defence and a firm supporter of global trade mechanism, China is forced to take necessary countermeasures against the US tariff proposals,” Mr Wang said.

The “America First” policy was a unilateral expression of economic hegemony and the international community should “boycott such acts of unilateralism that ignore the rules, in a joint effort to make those who think they can get their own way come to their senses and safeguard the hard-won growth momentum of the world economy,” he said.