Regulator warns ‘passporting’ companies must have ‘substantive presence’ in State 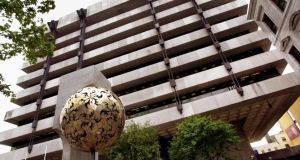 The Central Bank “will want to be satisfied that the mind and will of the entity are located here,” said director of policy and risk Gerry Cross. Photograph: Matt Kavanagh

Financial services companies looking to retain their passporting rights following a hard Brexit by moving to Ireland must establish a “substantive presence” here, a Central Bank executive has said, noting that there was potential for a “material” increase in financial companies moving to Dublin from London once the UK leaves the European Union.

Speaking at a Deloitte briefing on Brexit, Central Bank director of policy and risk Gerry Cross acknowledged Brexit “poses a number of challenges for Ireland and the Central Bank”, but added that it also offered the potential for a “material increase” in the number of applications for authorisation by the regulator due to the possible loss of passporting rights of UK-authorised entities.

This has already been in evidence, with companies such as London insurance market Lloyds and US investment bank Morgan Stanley cited as potential contenders for Irish operations following Brexit.

However, Mr Cross warned that the regulator would seek evidence of a “substantive presence” from applications.

“I think one thing that we will want to be very clearly satisfied about is that the risks that are associated with the business of the entity are governed, remunerated, managed and mitigated in and by that entity. That obviously flows through to the staffing that we would expect to see,” he added, noting that it would not make much business sense “to place a disconnected head in Ireland while the operations are run and the business is conducted elsewhere”.