It’s shaping up well for retailers for Christmas, better than for a good many year 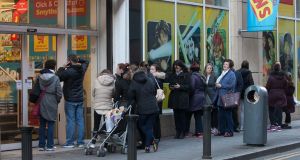 Black Friday passed off with nary a fist fight over a bargain nor even an altercation. Now for Cyber Monday. For retailers, the long march to Christmas is finally in full swing.

The trends have been so positive of late that shopkeepers and merchants might have expected an unqualified bonanza yesterday, but it doesn’t seem to have worked out that way.

The weather was foul, at least in Dublin, and it was far from bedlam on the shop floor. A mite busier than usual, yes – but not quite “total shopping”.

For all the hype – and hype is what it is – data showing a slight dip in retail sales in October present a mild dose of smelling salts for those who would say that money is burning in the punters’ hands these days.

Sales volumes eased by 0.8 per cent in October compared with September, which suggests the mid-month Budget didn’t exactly send people running to the stores. On an annual basis, however, the volume of sales was up 6.9 per cent. That’s quite a hefty uplift, and it shows that consumers are consuming as economic growth accelerates.

In value terms, it’s a similar story. The value of all sales dropped 1 per cent in October compared with September. Year-on-year, however, the annual increase was 3.5 per cent. Exclude the motor trade and there was no change in the value of retail sales and an annual increase of 2.4 per cent.

The good news for retailers is that discretionary spending is – mostly – still advancing. Furniture and lighting sales rose 3.8 per cent by volume in October compared with September and bar sales were up 2.1 per cent. However, electrical goods sales were down 2.9 per cent. It’s still shaping up well for retailers for Christmas, better than for a good many year. But it’s not quite a home run.