Call for budget measures to support firms at risk from Brexit 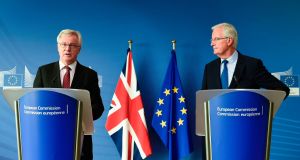 A failure by the British government and European Union officials to achieve progress in Brexit negotiations makes it even more crucial that measures to support Irish businesses be included in Budget 2018, Ibec has said.

The lobby group warned steps need to be taken to ensure the economy is prepared for all possible outcomes.

“Negotiations have yet to provide any clarity as to what future EU-UK relations will look like. While we must work to ensure a close, positive relationship into the future, the risk of a divisive divorce is very real,” said Ibec head of tax and fiscal policy Gerard Brady.

Outlining a number of measures, which it said would help at-risk companies, the organisation said Ireland’s competitiveness must be safeguarded.

Ibec urged the Government to consider introducing export trade financing and credit guarantees to support continued development of international markets. It also called for the extension of low-cost finance under the cashflow support loan scheme and increased additional marketing and innovation initiatives for companies looking to repackage their product lines for new markets.

The body also said Ireland must continue to make the case for a temporary state aid regime in the event of a hard Brexit. It said this would enable short-term financing similar to the supports introduced at the height of the downturn that helped firms through the financial crisis.

Ibec’s call comes as the Government was yesterday urged to increased funding for State agencies in next week’s budget, with the sums allocated last year described as “measly”.

Fianna Fáil said that while it welcomed the recent announcement of €6.7 million in additional funding to Bord Bia, further sums needed to be allocated to bodies such as Enterprise Ireland and InterTrade Ireland.

Budget 2017 allocated an additional €3 million to agencies charged with responding to the challenges posed by Brexit to take on extra staff with the funds spread across multiple organisations.

“While many of these positions have been filled, not enough is being done to put contingencies and awareness structures in place to safeguard Irish export businesses exposed to Brexit,” said Mr Collins.

A recent survey of 600 Enterprise Ireland client companies found that in the last six months just 38 per cent have taken measures to respond to Brexit, with 62 per cent having taken no action to date.

New figures from the Irish Hotels Federation (IHF), meanwhile, show Brexit is continuing to have a negative impact on the tourism trade with 80 per cent of hoteliers reporting a decline in business from Britain.

In addition, half of hoteliers report a decline in overnight stays from visitors from the North, the latest quarterly barometer shows.

The IHF report reveals that despite this, an increase in US and domestic visitors has helped offset losses.

Overall, 71 per cent of hoteliers reported a rise in business levels over the summer months compared with the same period last year.

Speculation continues to mount that Budget 2018 could see an increase in the VAT rate for tourism. The rate was lowered from 13.5 per cent to 9 per cent in June 2011 to assist the hospitality sector during the recession.

Hospitality groups, including the IHF, have called for the rate to remain at 9 per cent given the additional pressures arising from Brexit.

“The 9 per cent VAT rate for tourism continues to deliver enormous benefits to the exchequer by making us more attractive as a tourism destination,” said IHF president Joe Dolan.