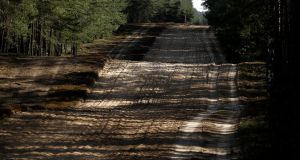 Running out of road? Poland is the biggest net recipient of EU aid and also the continent’s largest provider of cross-border labour. (Photograph: Kacper Pempel/Reuters)

Business is booming at Olsztyn-Mazury airport in northeast Poland: its two weekly flights, both to the UK, are booked up all summer and almost full for winter. Then it’s a trip into the unknown.

With the clock now ticking on two years of Brexit negotiations, Poland looks more vulnerable to a painful divorce between the UK and European Union than anywhere else.

Poland is the biggest net recipient of EU aid and also the continent’s largest provider of cross-border labour. And it’s in the arrivals halls at provincial airports like this former military base 160km (99 miles) north of Warsaw where those two things meet.

Refurbished using 121 million zloty (€28.5m) of EU cash, the airport revolves around servicing some of the almost one million Poles living and working in Britain, a third of all EU nationals residing in the country. Now, not only is their status in doubt, there’s also going to be less money as the EU loses its biggest net contributor after Germany.

“It’s obvious that Brexit is crucially important to us,” Deputy Foreign Minister Konrad Szymanski said in an interview in Warsaw. “If we don’t carry it out well, it will harm the internal market. And it will probably be difficult to co-ordinate on residency issues because the stakes are uneven.”

The onset of Brexit could hardly have come at a worse time for the country. Its nationalist government is increasingly isolated in Brussels after trying to oust EU president Donald Tusk, a former Polish premier. At the same time, the country relies on EU investments to prevent the economy from slowing.

More than €250 billion were or will be spent since Poland joined the bloc with other former communist states in 2004. In today’s dollars, that’s equivalent to more than the US-funded Marshall Plan provided to western Europe after the second World War. The Law and Justice leadership has said it seeks to weaken, not strengthen, EU institutions after Brexit.

Prime Minister Beata Szydlo accused the EU of posing a threat to Polish sovereignty last year when officials questioned why she hadn’t implemented the rulings of the nation’s top court. That poses a real risk that Poland’s $477 billion (€448bn) economy will be left behind should the rest of Europe choose to integrate faster following Brexit, according to Miroslaw Gronicki, who served as finance minister during the year after Poland joined the EU.

“Poland’s biggest success isn’t how much EU funds it absorbed, but how much its economy opened up and gained from the single market,” Gronicki said. “If some EU members start deepening their relations without Poland, we will surely lose out.”

The latest EU budget is supposed to run until 2020. Brexit talks are due to finish – with or without a deal – in March 2019, and Poland will be watching closely. Central bank Governor Adam Glapinski said “calm thinking” about the economy will end with the EU’s current agreed budget. “Or earlier because of Brexit,” he said.

The aid enriched Poland, doubling economic output per person in a decade. Growth surged to 3.9 per cent in 2015 before slowing to 2.8 per cent last year because of a slump in EU co-funded investments following the change of government and a new EU budget cycle. The money has been used to build everything from roads to water treatment facilities to municipal swimming pools and airport facilities, all part of the EU’s policy to improve living standards in its poorest regions.

Polish salaries, though, remain on average a third of those in Britain and there’s still little sign of the great return home once predicted. Indeed, the UK has said it wants a quick agreement on the status of EU nationals living in Britain and likewise for British citizens elsewhere in Europe.

But when it comes to early promises, Germany wants the UK to commit to pay its bills to the EU, according to two people familiar with the Berlin government’s strategy. The European Commission says British obligations are as high as €60 billion, a figure the government in London disputes.

The Olsztyn-Mazury airport, whose flights connect the area with Luton and Stansted near London, has its own strategy. From May it plans to offer weekly flights to Norway, though the airport’s bullish head of operations says that’s unrelated to Brexit. “Last year we flew 50,000 passengers and this year we’ll top 100,000,” says Tomasz Kadziolka. “And the plan is to keep growing quickly.”